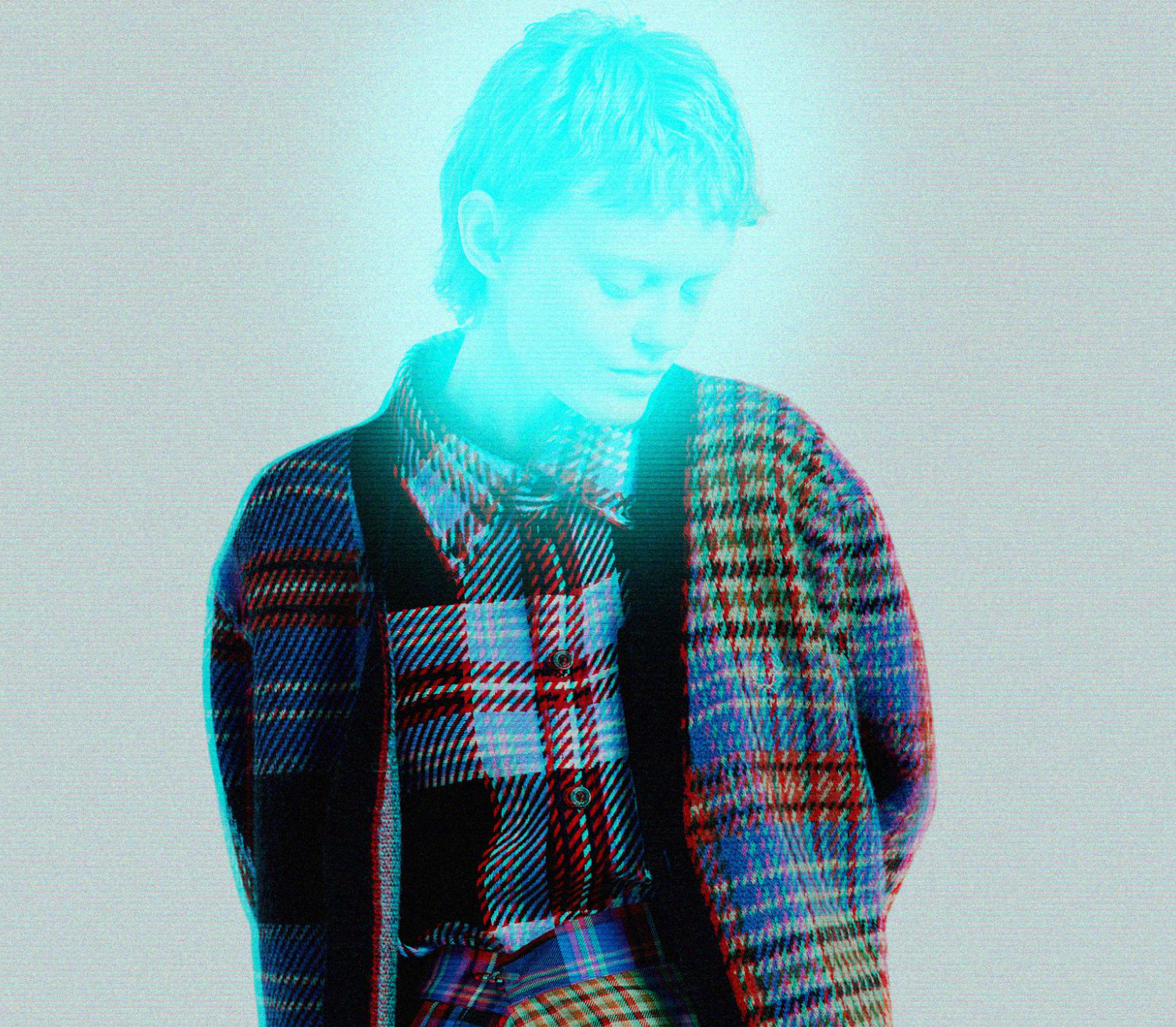 In Review 2021: the year when two was better than one as brand collaborations got hot

Two is better than one was the order of 2021 it seems, as there were more brand collaborations than ever. Here’s a rundown of 10 of our faves of the year. 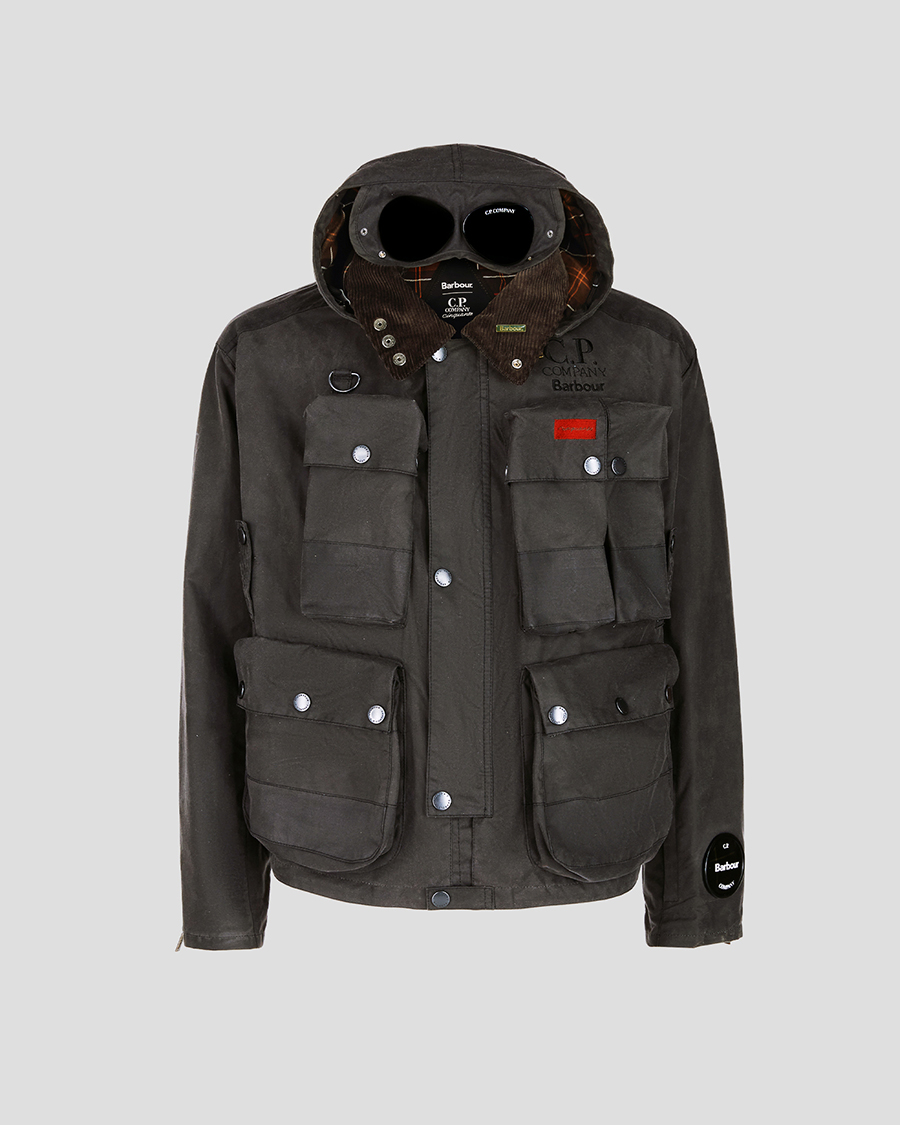 British heritage outerwear meets Italian sportswear. It was always going to be a winner. While Barbour had another albeit more surprising collaboration with A Bathing Ape (BAPE) for AW21, which also hit the spot, the teaming up with the Italian stallions of jackets – in C.P.’s 50th anniversary year – was a genius move. “Brands don’t really collaborate, it’s the people in the brands that collaborate,” said Barbour’s Director of Menswear, Ian Bergin. “This one was a lovely one to do because you are dealing with very like-minded people who just love product and are really into getting it all right.” We loved it too.

Check out our podcast with Barbour's Ian Bergin here. 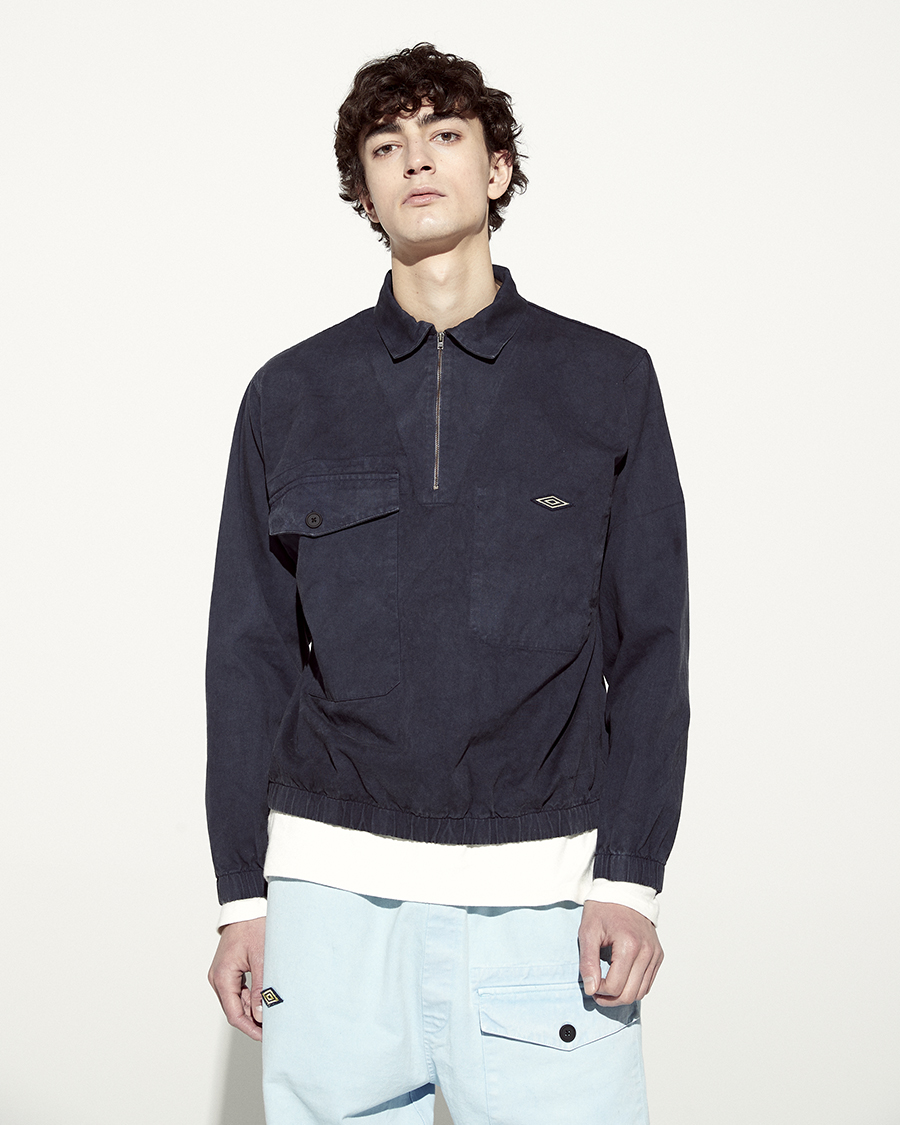 Nigel Cabourn has, as always, been busy on the collaborations front this year, with Yogi footwear and Vans both teaming up with the British menswear maestro to name but two. But the partnership with the sportswear institution – and makers of football and rugby kits in Manchester since 1920 – that is Umbro was a gift waiting to be given. Cabourn gave his spin on Umbro’s classic drill training top that dates back as far as the 1930’s, a silhouette originally used by the military and police PT instructors, which quickly became a staple piece of British sportswear. He added both internal and external ‘map’ chest pockets, inspired by the WWII British army pant, and we were all left panting for more. 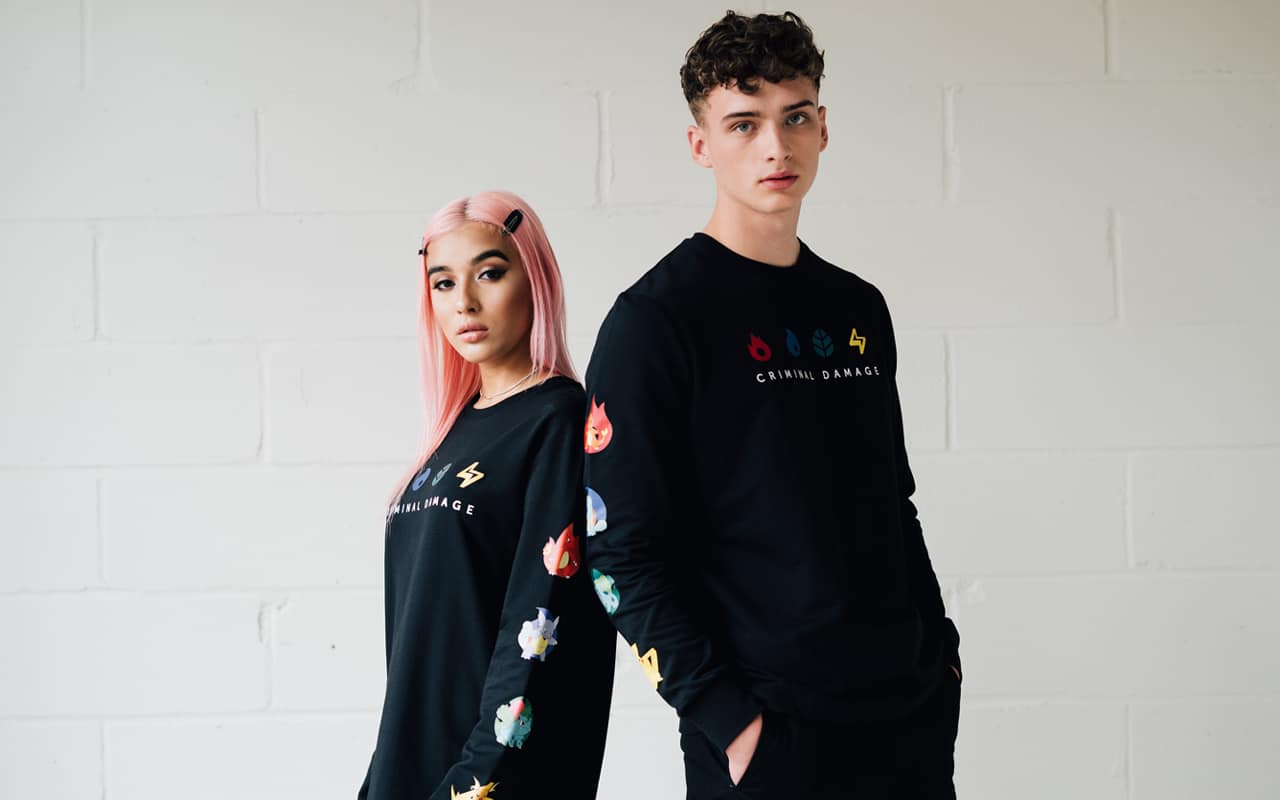 Another anniversary collaboration saw streetwear brand Criminal Damage, which celebrated its 30th year in 2021, join forces with Nintendo’s cult favourite Pokémon, which itself celebrated its 25th year, on a limited-edition collection paying homage to some of Pokémon’s most iconic characters and symbols, including Pikachu, Charizard, Mew Two. Since Pokémon was released in 1996, the franchise has evolved into not only one of the world’s most iconic video games, but also a vast entertainment franchise which has majorly impacted popular culture. Converse and Axel Arigato also collaborated with the franchise this year but Criminal Damage was first up, giving it a brush of Criminal Damage’s signature streetwear aesthetic, in a 12-piece collection of Tees, hoodies and tops, was a fitting tribute to all the Millennials and Gen Z’s who grew up playing it. 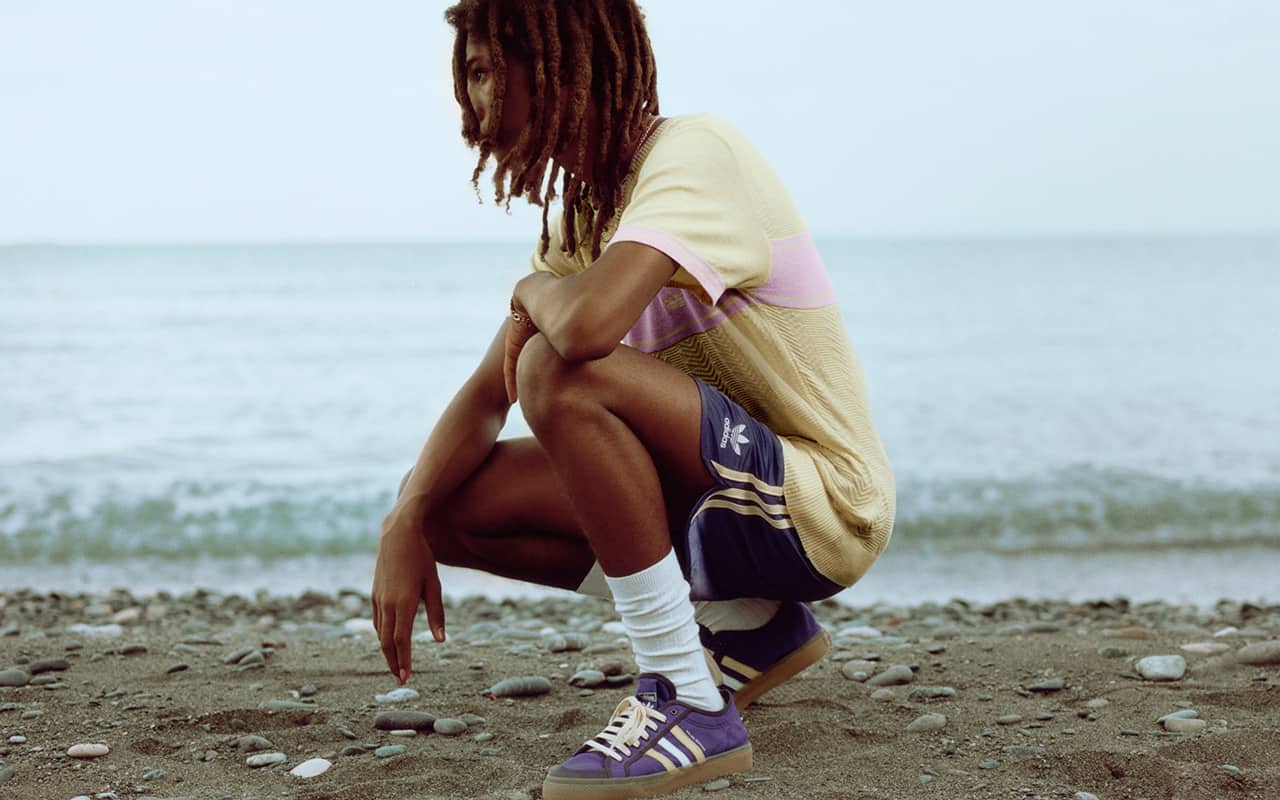 This SS21 collaboration was cooler than cool. Initially previewed during Men’s Paris Fashion Week in September 2020, the collection built on designer Wales Bonner’s previous vision to explore “the diasporic connections between Britain and the Caribbean”. Featuring both footwear and apparel, Bonner reworked old school 70’s Adidas tracksuits, football jerseys, shorts and "Samba" and "Nizza" trainers, exploring the origins of dancehall music in Jamaica and infusing a number of iconic Adidas looks that Bob Marley would have been proud of. 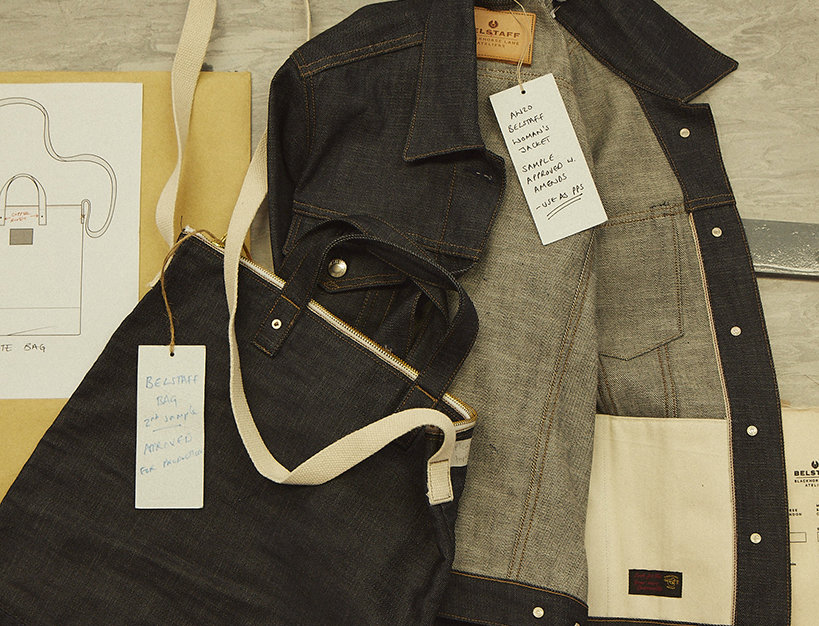 Another heritage British brand taking itself into a different ball park, Belstaff teamed up with East London’s selvedge denim makers Blackhorse Lane Ateliers to give us a women’s ‘Marilyn’ denim jacket and high-rise jean, and a men’s ‘Union’ jacket and jean, as well as a unisex bag – all made out of organic cotton. The 14oz redline selvedge denim was from ISKO, a company with patented technologies which have revolutionised the denim industry using environmentally friendly processes and production techniques. One of Belstaff’s oldest logos was referenced in the collection, combined with the Blackhorse Lane Ateliers’ logo. The jacket and jeans also featured a pocket flasher that referenced a heritage Belstaff swing-tag from the 1950’s. Great stuff.

This wasn’t about your usual “merch” as you’d expect it might be, more a coming together of minds between Bravado, Universal Music Group’s merchandise and brand management company who are in partnership with the Stones on the RS No.9 store on London’s Carnaby Street, and quirky British eyewear brand Kirk Originals. This was a first of five “made in Britain” collaborations “between the band and brands”, with others including Lewis Leathers, Tricker’s, The Great Frog and Johnstons of Elgin, so “Wild Horses couldn’t take us away”. The collab comprised of two styles of limited-edition sunglasses, called "Aftermath" and "Black and Blue", both inspired by iconic Rolling Stones’ albums and featuring the band’s famous tongue logo discreetly on the arm of the sunglasses. Seductive shades that were very rock ‘n’ roll. 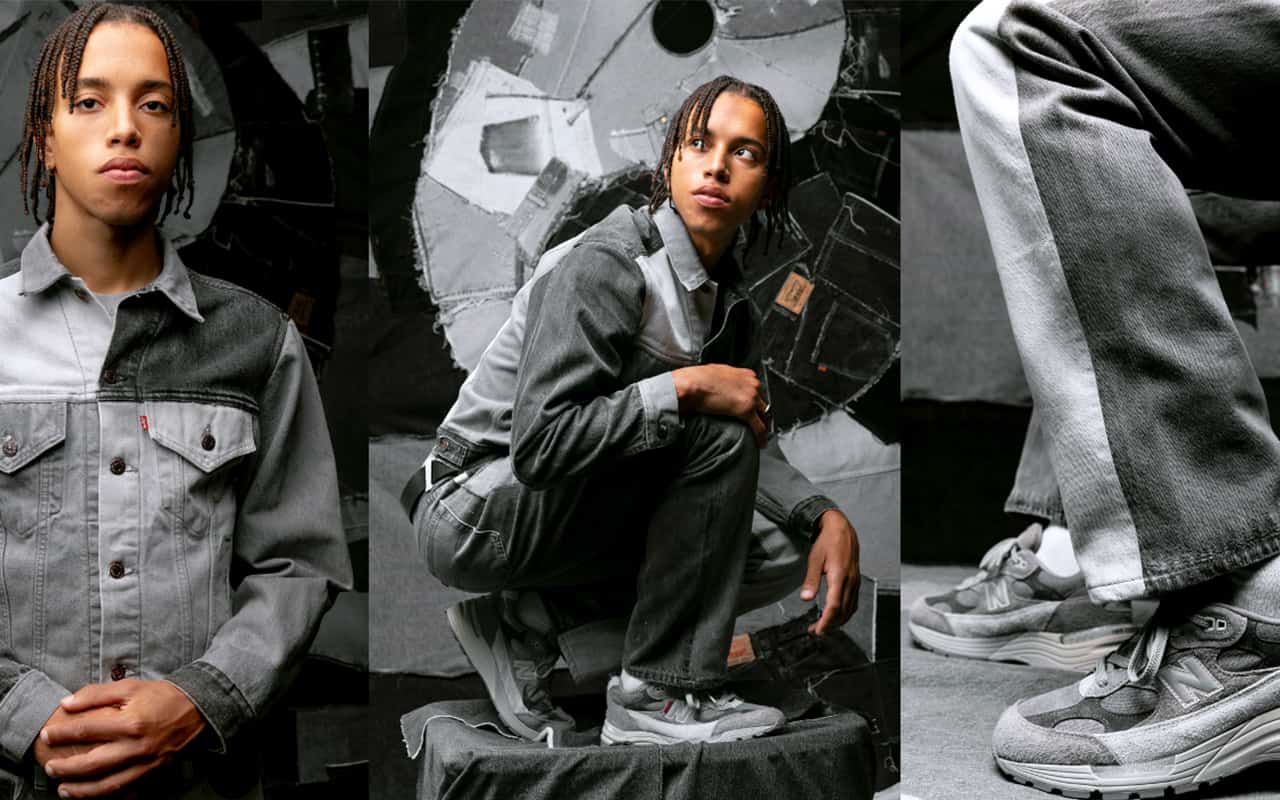 Another surprise combo for 2021 was heavyweights of denim Levi’s and “the royalty of running shoes” New Balance, on a collection of sneakers and denim jeans and jackets that celebrated “the beauty of vintage”. It featured patchwork Levi’s 501 jeans and a "Trucker" jacket, as well as patchwork New Balance 992 sneakers. The collaboration utilised three different grey washes of reconstructed Levi’s denim, all made in the USA. The New Balance 992, which was first released in 2006 to celebrate the brand’s100th anniversary, was constructed from a patchwork of grey hairy suede and upcycled grey Levi’s "Authorized Vintage" denim, featuring a reflective Levi’s red tab sewn into the "N" on the side of the sneaker, as well as a special edition red ‘Levi’s for feet’ printed insole. Don’t ask us how, but it worked. 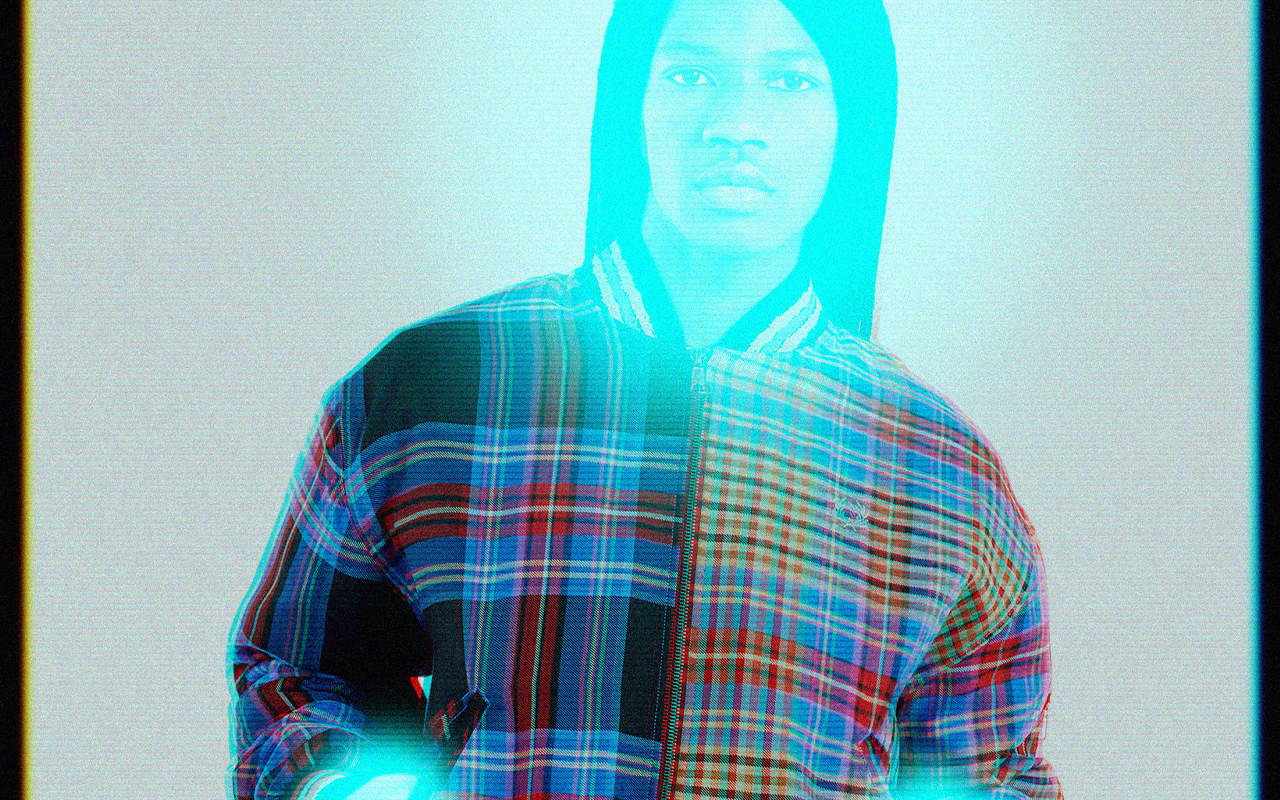 As you’d expect from any Fred Perry collaboration, this one was inspired by British youth culture and individualism. Glaswegian born and London-based designer Charles Jeffrey looked to reinterpret Fred Perry’s subcultural uniform through his “inimitable lens of vibrant punk optimism” (pictured above and main image). Fred Perry polo shirts, a knit jumper and a kilt were all presented through Jeffrey’s own directional viewpoint, with his LOVERBOY aesthetic. The two labels’ shared heritage of tartan was celebrated as Jeffrey twisted traditional patterns and “added subversive DIY flamboyance”. Jeffrey’s signature knitwear was also introduced through Aran knit jumpers and cardigans and knee-high socks. The project celebrated Jeffrey’s lifelong passion for music, specifically the burgeoning "nu-rave" and indie scene which dominated his early years as a student in London. Fans of both brands said “rave on”. 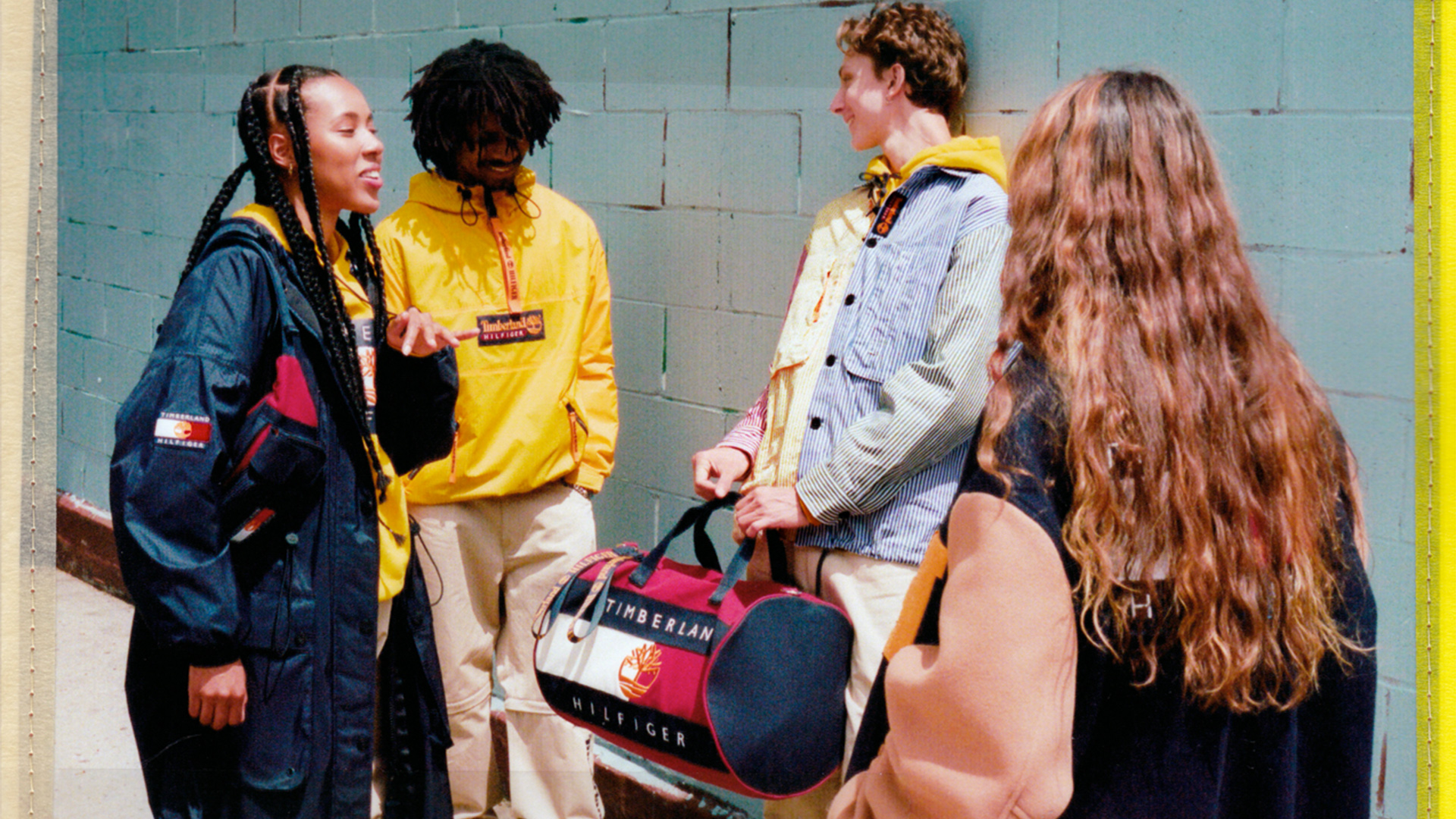 When two American heavyweights come together you know you’re in for something that packs a punch. Tommy x Timberland took the classic American DNA of one and the authentic outdoor and work aesthetic of the other and fused them in a fashion fire pit. Drop number one featured a 17-piece hybrid capsule that paid homage to the colourful signature styles of the ‘90s while celebrating the heritage of the two iconic brands. The classic Timberland 6-inch boot was also remixed with the classic Tommy Hilfiger flag, with added zip detailing. Hilfiger commented: “This partnership with Timberland has been such a creative adventure for me and a long time coming. Culture shaped our brands, and in turn we shaped the fashion landscape of the time.” Christopher Raeburn, Global Creative Director of Timberland, added: “The power of collaboration is bringing the best each brand has to offer, then pushing boundaries to create something radically different, together. It’s like a cultural memory book, seen through a progressive lens.” 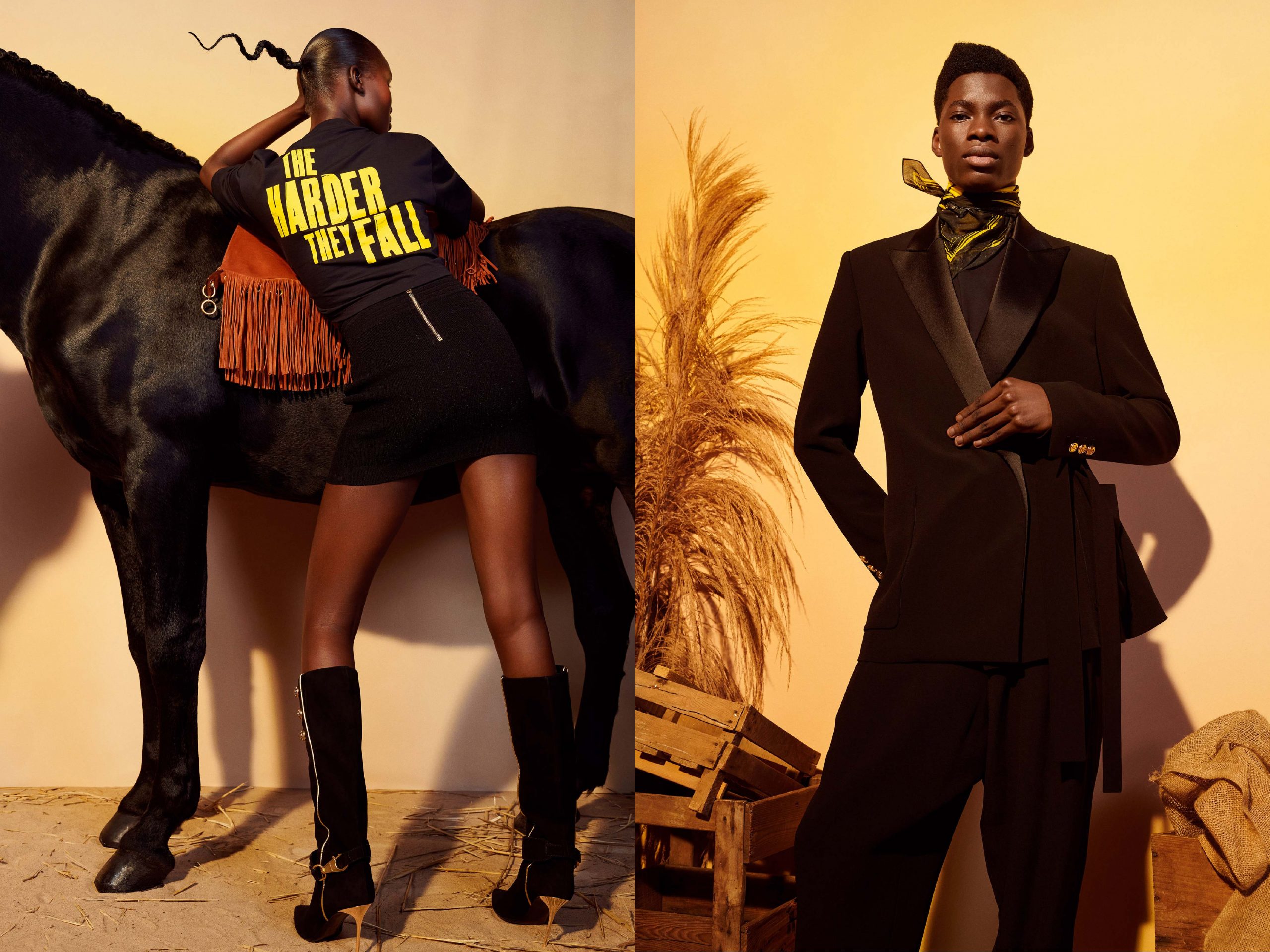 2021, or certainly the first third of it in Lockdown 3, would have been a struggle without Netflix, so we couldn’t resist their random collab with luxury fashion label Balmain for the Netflix western film "The Harder They Fall", which stars Idris Elba and focuses on the black cowboys of America’s "Wild West". It was Netflix's very first luxury fashion collaboration, encompassing menswear, womenswear and accessories. Balmain’s French designer Olivier Rousteing said the collection was inspired by the spirit of the ground-breaking western films, and described it as “capable of looking just at home when worn by Balmain army members on the avenues of Paris as it would on the all-star cast in the beautiful open spaces of the American West.” Quite. In addition, luxury fashion platform Farfetch brought the collaborative collection to life by creating 3D social content for its Instagram channel, allowing fans of the film and of Balmain to experience the film sets through social media before shopping the capsule collection on its site. A clever coming together indeed. 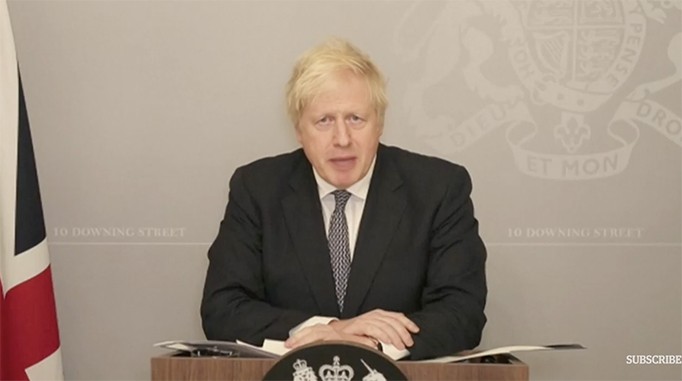 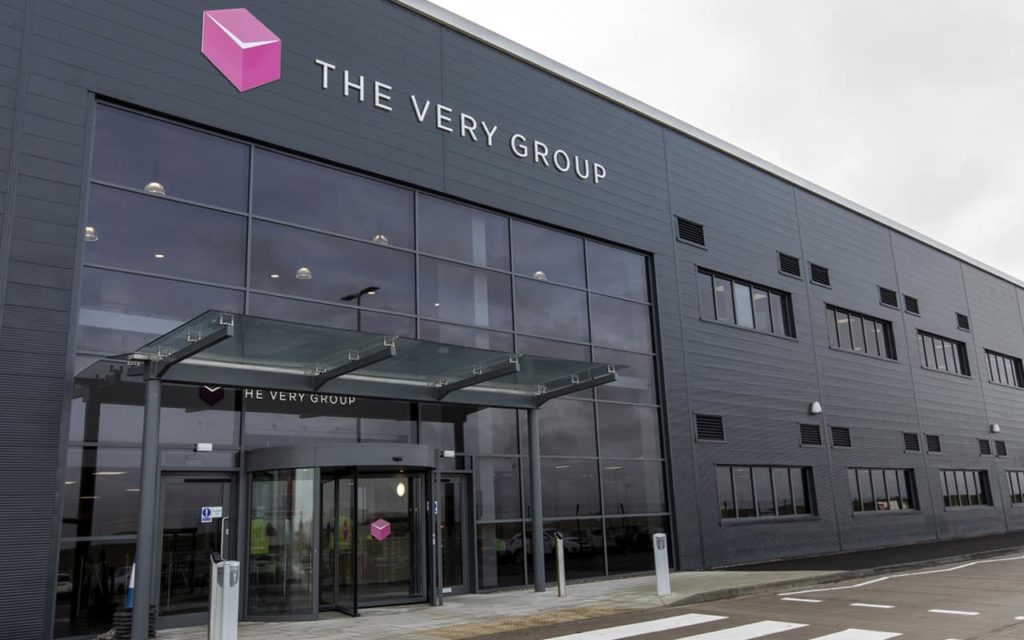 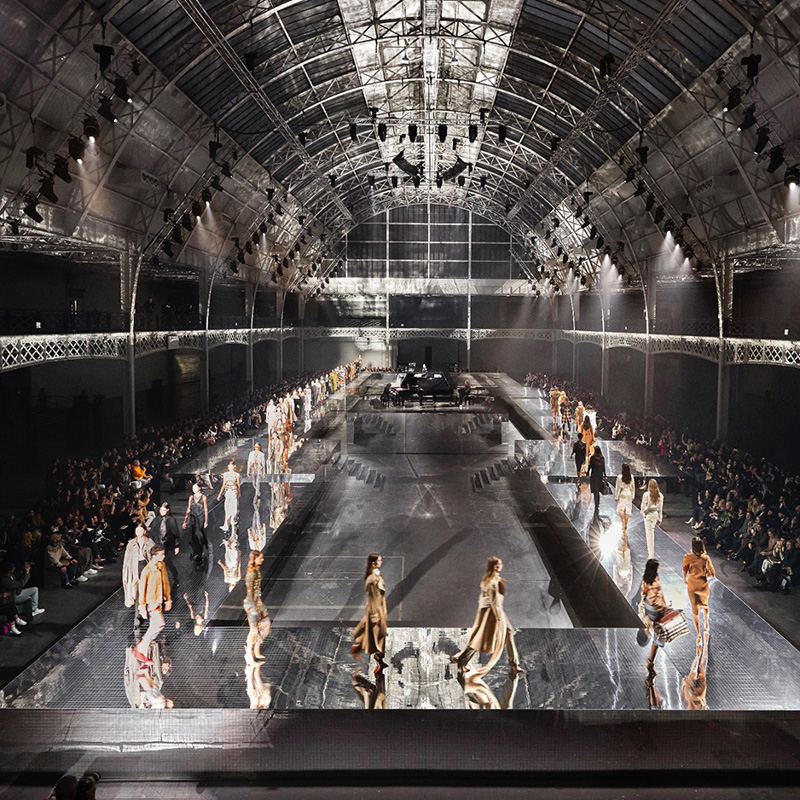