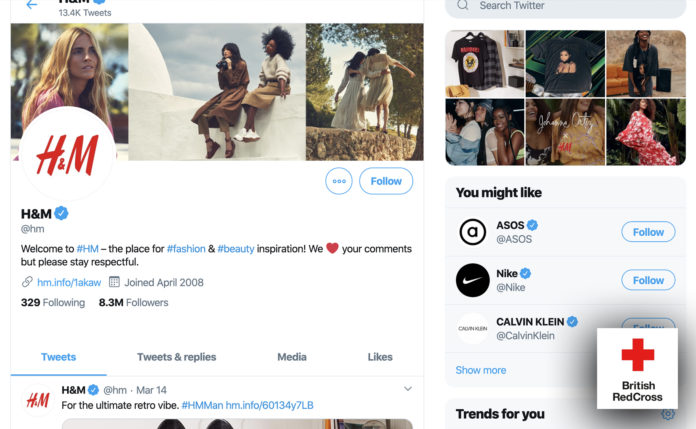 H&M has announced it will let global aid organisations, such as the Red Cross, utilise the H&M social media channels, to spread messages about how to help tackle the widespread effects of the COVID-19 pandemic.

The fashion retailer currently has over 120 million followers across the globe, with 8.3 million on twitter alone, allowing its post and social media campaigns to further spread messages across to millions of people.

Sara Spännar, Head of Marketing and Communication at H&M, said: “The current situation is affecting each and every one of us, and like many other organisations, we are doing our best to help.

“Opening up our social media channels and letting aid organisation utilise our reach is one way we can contribute. We are currently in discussions with other organisations and are also looking into the possibility of sharing other H&M channels.”

Since 2011, H&M have partnered with British Red Cross to raise more than £3.7 million, donating end-of-season garments or those with minor damage to sell in their network of charity shops.

H&M announced last week that opened up its global supply chain, including its widespread purchasing operations and logistics capabilities, to produce and deliver personal protective equipment to hospitals worldwide.

The high street brand also confirmed it was considering cutting thousands of jobs, as the business suffers revenue setbacks amid the global health crisis.