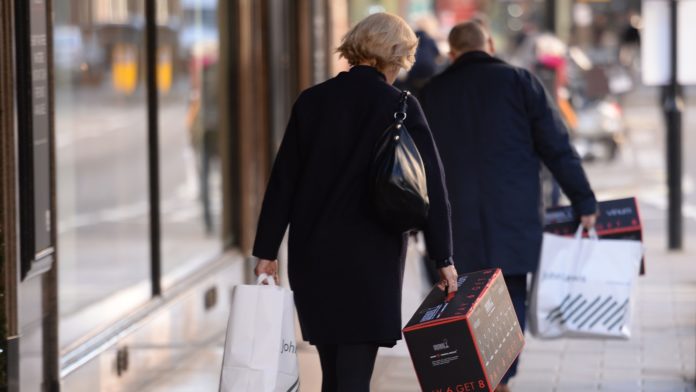 Retailers have endured their worst September month in more than 20 years amid the political “gridlock” surrounding Brexit, new figures reveal.

With the “spectre” of a potential no-deal Brexit weighing on consumers’ purchasing decisions, it was the worst September since records started in 1995, according to the British Retail Consortium (BRC)-KPMG retail sales monitor.

Total retail sales fell by -1.3% year-on-year in September, compared with a 0.7% annual increase in September 2018.

Helen Dickinson, chief executive of the BRC, said: “With the spectre of a no-deal weighing increasingly on consumer purchasing decisions, it is no surprise that sales growth has once again fallen into the red.

“Many consumers held off from non-essential purchases, or shopped around for the bigger discounts, while the new autumn clothing ranges suffered from the warmer September weather.”

She said the “ongoing political gridlock surrounding Brexit is harming both consumers and retailers”.

She continued: “Clarity is needed over our future trading relationship with our closest neighbours and it is vitally important that Britain does not leave the EU without a deal.”

He continued: “Consumers are choosing to focus on the essentials, with food one of the few categories delivering growth.

“We will likely experience increased promotional activity to clear surplus stock, which doesn’t bear well for retailers desperately trying to make up for lost ground after several difficult months.

“Retailers’ focus needs to be on cost and efficiency, with only the leanest and most efficient operations coping with this extreme test of endurance. October, and the ramping-up of Brexit plans, will clearly be a real test for the industry as a whole.”

Meanwhile, a separate report from Barclaycard, which sees nearly half of the nation’s credit and debit card transactions, said consumers were continuing to prioritise “experience” spending.

Similarly, spending on digital content and subscriptions grew by 9.8% – in contrast to the “challenges” faced by the retail sector, Barclaycard said.

A survey over 2,000 people across the UK from Barclaycard also found fewer than three in 10 (29%) feel positive about the state of the economy.

Two-fifths (41%) feel pessimistic about their ability to spend money on discretionary items – and just over half (51%) are worried about the rising cost of everyday items impacting their buying power.