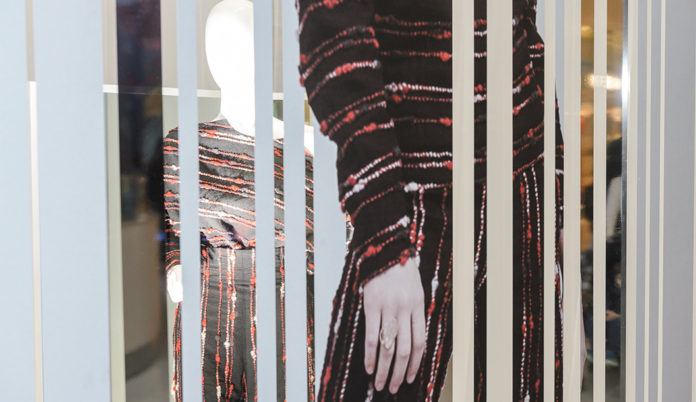 Westfield has teamed up with London College of Fashion’s Innovation Agency to showcase British creative talent at its West London mall.

The first designer to be showcased in The Village area of the mall, home to luxury brands such as Mulberry, Prada and Louis Vuitton, is Martine Jarlgaard, who is displaying pieces from the collection she presented at London Fashion Week last September in what is believed to have been the world’s first “mixed reality” show.

The show, which was a collaboration with London College of Fashion’s Innovation Agency, DoubleMe and W London Hotel employed augmented reality where life-size holograms were superimposed into the presentation space enabling guests to walk around and explore the items from all angles.

For the first time the physical collection will be on display at Wesfield in an installation that has taken the theme of the mixed reality show, recreating the holographic effect in a physical format and inviting shoppers to interact with the display via the mirrored image while catching a glimpse of the actual collection behind.

Jarlgaard said collaborating with Westfield and LCF’s Innovation Agency was a “privilege”. “The fashion I envision isn’t fashion as we know it. The partnership between Fashion Innovation Agency, Westfield and Martine Jarlgaard London is a window of a more interactive, exploratory future where consumers are drawn towards experiences, ethics, authenticity and vision which goes beyond mere aesthetics,” she added.

Westfield Europe CMO Myf Ryan said it hoped the collaboration with LCF would be a long-term one “which gives our best UK talent access to spaces they would not normally have access to, as they embark on their careers.”

“Since entering the UK, Westfield has a long history of working with up and coming designers and artists who are now some of the creative industry’s biggest names. Being able to offer physical space in premium locations within our malls not only adds value to the designers, but is of huge interest to visitors to our centres and we believe Martine’s mixed reality collection is perfect to launch this collaboration,” she added.

Throughout 2017 more LCF-supported designers and artists will feature in key spaces across both Westfield London and Westfield Stratford City, and the mall and the college say they will be exploring more opportunities to collaborate ahead of LCF’s planned move to Stratford in 2021.