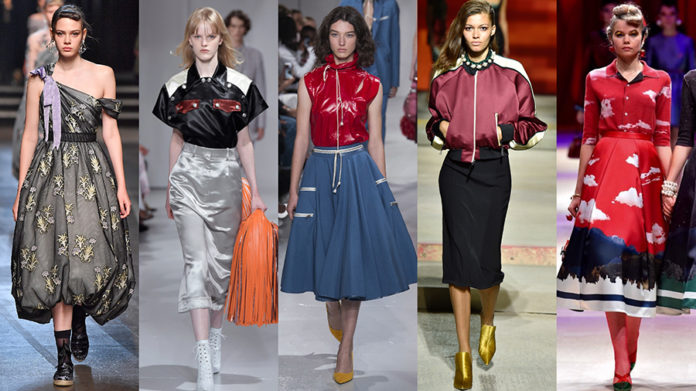 The SS18 shows are over and the pre-collections are just a few weeks away. But in design studios and buying offices the world over, the industry is still poring over the collections to decide what could feed through into their own offer next season, the seasons after, and in some cases, the current season. So what did we find on the runways that we think will hit the hight street sooner or later?

We don’t usually expect spring/summer to be a big season for knits but continuing AW17’s statement knit trend, designers went big on this category. And when we say big, we mean BIG. Think oversized school cardies/varsity cardies in chunky yarns that can be worn in lieu of summer coats. Super-casual, they’re the perfect chuck-it-on or stuff-it-in-your-bag pieces. A close relation to these was the slouchy sweater, relaxed, chunky, often in power brights or sorbet shades, it also comes in ultra-distressed finishes. And the final item in a trio of power knit trends was the retro tank. A great transitional piece, it works with both casual or more formal looks.

Shorts are staging an SS18 comeback and the shorter the better. Don’t think Bermudas, think anything that puts the leg on show with sport shorts or dressier versions in high-shine leathers, metallics, sequins or satin. To make them work, team them with the frilliest of frilled blouses, one-shoulder top, or a sharp tailored tux, plus boots or heeled sandals for an after-dark statement.

And talking of short, the mini skirt made an impact too. OK, mini skirts are never far from fashion’s mainstream, but this time around they hit some of the biggest runways. One option was a schoolgirlish take with a slight flare that could be ultra-luxe in materials like snakeskin. But also key was an 80s Dynasty edge with the bodycon mini being cool again for the first time in, well, ages. Some interpretations of this are bound to be disturbingly tacky but when you think ‘mini skirt’ that’s always a risk. Elsewhere, this will be a strong evening option for the youth market.

Actually this dress is frequently far from little but the point is that it’s white above all else. Whether it’s a girlish confection of broderie Anglaise and guipure lace, or draped jersey, intricately cut satin crepe and sequins, the white dress is the key trend piece for evening and sunshine daywear. The trend is a real gift for the more dressed down bridal sector, although bridal specialists might not be happy with mainstream fashion store rails being full of bride and bridesmaid-ready dresses. Elsewhere, this is a high summer option – expect to see the power of white hitting with the holiday and occasion sector.

There was a 50s retro current running through many collections but it was more 50s pastiche or 50s inspired than a full-on embracing of times gone by. It took in the power of wiggle-dresses and skirts to full Bobby Soxer skirts, retro floral prints, and 50s pop culture graphics. The Americana obsession of some labels also fed into this trend with the American diner waitress uniforms seen at Calvin Klein in the forefront here. Across the Atlantic, Erdem took a different path with regal Queen Elizabeth inspiration courtesy of the royal archives (although maybe the Netflix hit The Crown also played a subliminal part here). It gave us glorious brocades and puffball skirts that were totally desirable.

What the high street sells on its denim shelves and what walks the runway are often a world apart but the two have drawn closer together of late with embellished denim having made an impact. Designers don’t seem ready to give up on decorative denim just yet with plenty of labels still piling on the beading. This worked best when combined with ultra casual pieces like a wide, boxy jacket or boyfriend (rather than tight/glam) jeans. But we’re also seeing denim moving on with details such as patchworked stars at Coach or the pop culture paint/print effects seen at Calvin Klein feeling more directional. Coloured denim, in the season’s extreme citrus shades put in an appearance too and tonal contrasts also worked well to dress up simple denim separates. But it’s impossible to ignore Balenciaga’s multi-pocket cargo-esque jeans for a heavily detailed piece that justifies a price premium but also moves well away from glitter and shine.

It didn’t matter what the pattern was but designers liked to play with contrasts, mixing patterns of contrasting sizes, colours and effects in one piece. The idea works for all the season’s biggest pattern stories from the perennial stripes, check, spots and classic florals to the influx of animal prints, retro florals or jazzed up geometrics. Some labels combined it with a hard-edged embellishment too with studded or roughly beaded panels that served to reinforce the anti-minimalist message.

Just as the shorts and mini skirt trend puts the focus squarely on the wearer’s legs, the sheer skirt does so too, although with a softer edge. Some of the pieces shown on the runways will come with underskirts when they hit the stores but as an idea, they underline the importance of sheer materials at present and the impact that layering can make. That doesn’t mean layering in order to add bulk. Instead, this is more refined, with a lighter touch that saw designers layering a sheer skirt over a micro mini, over shorts or skinnies. It helped to soften tailoring or add a laugh and feminine twist to some of the season’s heavier knits.

Why let mini bags have it all their own way? Oversized shoppers are a likely high street hit as they offer up so many options for decorative designs at affordable prices. Think power colours, giant fringe trims, massive logos and monograms fabrics, scenic prints, embellishment contrast colour trims.

Spare a thought for the poor pantsuit. It gets a bad press and isn’t always the bestseller (John Lewis’s recent 2017 product trends report said pantsuits haven’t been doing very well at all). But they’re also a staple that many women choose as their default workwear and designers keep on trying. The big corduroy and velvet trend could be a godsend here. It gives the pantsuit a cooler edge and rescues it from corporate blandness. And colour is a way to ring the changes too. The season’s sorbet shades or its obsession with high shine help give the pantsuit a stronger trend edge too.