High street giant River Island has unveiled its “people positive” SS18 campaign which celebrates individuals and diversity under the hashtag #Labels Are For Clothes.

At the heart of the multi-media campaign is a high-energy short film, shot by photographer Richard Burbridge and styled by Ondine Azoulay, featuring a diverse range of characters, including a curve model, gender fluid models, ethnically and age diverse models, and a gay couple, dancing to Fever by Endor. 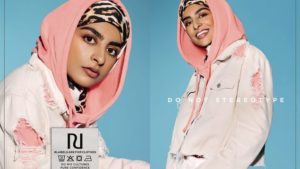 The cast of 12 characters are featured on River Island’s website. giving their opinions on what it means to be individual, and on posters which feature garment labels with positive messages that play on washing instructions, such as “100% committed, made to love” and “Do not mix cultures, pure confidence”.

River Island has also teamed up with anti-bullying charity Ditch the Label to create a range of clothing, including T-shirts and sweatshirts, featuring the #Labels Are for Clothes messages. The retailer will donate £3 from every sale to the charity and a further £1 for every social share that features the hashtag. 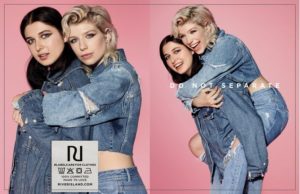 “This spring we celebrate 30 years of River Island with an exciting people positive campaign. Bringing together a diverse cast as the faces and voices of RI, we explore identity and reject the idea of labelling. We believe that LABELS ARE FOR CLOTHES, NOT PEOPLE, so we’re spinning tired stereotypes on their head and reclaiming labels to make them positive and truly REAL!” River Island said.