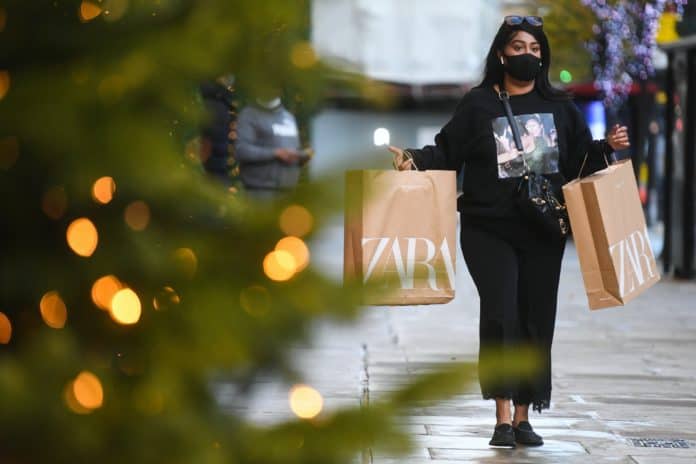 UK retail sales volumes in October were 1.2% higher than September despite restrictions tightening again in many areas of the UK, according to the Office for National Statistics. But the clothing sector continues to struggle.

The ONS revealed that sales grew for the sixth consecutive month as online purchases continued to soar.

The figures surpassed the expectations of analysts, with a consensus of economists forecasting a dip of 0.3% for the month.

Sales for October were 5.8% higher than the same month last year as retailers said “consumers had started Christmas shopping earlier this year”.

Shoppers spent more online during the month, as sales jumped by 52.8%. Meanwhile, store sales declined by 3.3% as shops in some regions were affected by tightened restrictions.

“However, the slow recovery in clothing sales has stalled after five consecutive months of increased sales.”

Clothing retailers reported a 14% slump in sales values in October, as store sales plunged by 22.1%. However, online sales of clothes increased by 17.1% for the month. Meanwhile, total food sales increased by 3.4% after another surge in online purchases.

Lisa Hooker, consumer markets leader at PwC, said: “There was a recovery in almost every category of the sector, and measuring the period to 31 October, these figures don’t include the last minute rush to the high street after the second lockdown was announced.

“In fact, the only category to show a material decline in sales was fashion, with less demand for occasionwear and workwear continuing to hit an already beleaguered part of the market.

“The closure of non-essential stores and slump in consumer sentiment earlier this month will severely hamper the sector with little over a month to go to Christmas and Black Friday just a week away.

“Looking ahead to December, with online delivery capacity already stretched to its limits, retailers will be hoping for a swift lifting of lockdown restrictions and that consumers continue to show they can bounce back into spending mode, as they did after the first lockdown was lifted in June.”