During the past decade, the scramble for cheaper manufacturing and fast-changing trends has taken over the fashion industry resulting in a worldwide waste crisis.

The Copenhagen Fashion Summit reported that fashion is responsible for 92m tons of solid waste dumped in landfills each year, while a recent study by the Ellen McArthur Foundation found that one garbage truck of textiles is wasted every second.

Further to this, in 2018 the UN reported how the fashion industry is also the second-biggest consumer of water, producing 20% of wastewater and generating more greenhouse gas emissions than all international flights and maritime shipping combined at the same time.

However fashion brands and designers from all walks of the market have started to not only improve their sustainability policies, but to also recycle an array of waste materials and use them in different ways to give them a second life. In 2016, for example, actresses Lupita Nyong’o, Emma Watson and Margot Robbie walked the Met Gala red carpet wearing gowns by Calvin Klein made entirely from recycled plastic bottles.

With the rise of resale websites such as Vestiaire Collective, recycling, hiring and buying vintage has become more and more important – especially amongst millennials – and the number of brands testing different recycling schemes has increased.

According to our exclusive study How Britain will Shop for Fashion in 2019 and Beyond (to be serialised on TheIndustry.fashion in the coming months), British consumers of all ages are very open to the idea of recycling their old clothes, much in the same way they have become used to recycling packaging and bottles.

Merely proving more in-store recycling points would be effective, but far less so (unsurprisingly) than offering an incentive.

What is striking though is that while consumers feel only a mild responsibility themselves to recycle more (or perhaps they feel they do enough already) they felt much strongly that brands should do more.

When asked how strongly they agreed with the following statement –  “I have too many clothes and I need to think more carefully about how I dispose of them” – only 5% strongly agreed, with 7% agreeing and 19% somewhat agreeing. The rest were either neutral on the subject or disagreed

However when asked how strongly they agreed with this statement – “Brands and retailers need to do more to help consumers dispose of old clothing” – 10% strongly agreed, 20% agreed and a further 29% somewhat agreed.

With this in mind, we take a look at some of the very recent initiatives brands and retailers have announced.

The value fashion giant opened its biggest store in Birmingham at the beginning of April. However, this location differs from others (not just due to its size and multiple cafes) but due to its innovative recycling area: a space where shoppers are given the opportunity to donate used clothes and shoes of any brand for recycling. While there’s no financial incentive the benefit of being able to drop off any brand of clothing will be seen as incentive enough and should drive even more footfall to this store that has reportedly been heaving with shoppers since its opened. This new move for Primark which further enhance its reputation for innovating with sustainable practices (such as publishing a full list of its suppliers and its Sustainable Cotton Programme to name just two). 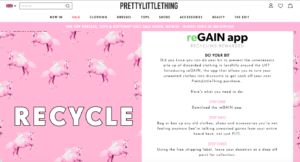 The online fast-fashion brand, alongside Missguided, New Look, Oliver Bonas and Superdry, has partnered with Regain, a clothes recycling app which allows its users to donate unwanted clothes at pick-up points. In return, they can receive discount codes which can be used with Regain’s retail partners. Its ultimate aim is, of course, to prevent unwanted clothes from heading to the landfill.

Recently, Umar Kamani, Pretty Little Thing co-founder, said on Instagram: “We’ve partnered with [Regain] to encourage you to send back your old clothes in return for some amazing PLT discounts… let’s start making a difference together to protect our amazing planet.”

Further to this partnership, Pretty Little Thing is selling 100% recycled clothes made from a mixture of factory waste and recycled plastic bottles.

This combination of incentive plus recycling will appeal to the brand’s young consumer base, who according to our study would be most excited by such an initiative.

At the end of April, Arket will launch a new recycling scheme which will involve taking clothes back in all of its stores. Its customers will be able to take all unwanted or unused clothes, shoes and textiles from any label to the stores for recycling in a similar initiative to Primark.

Managing director, Lea Rytz Goldman, said: “We’re happy to offer our customers an easy way to recycle their unwanted clothes and textiles. Sustainability and circularity have been primary considerations in the development of Arket, so this feels a natural next step for us.”

The scheme follows the one already in use by its owner H&M where customers are able to hand in bags of unwanted clothes, in any condition and by any brand, to receive a £5 voucher. The clothes collected are then reused, reworn or recycled with 0% going to landfill.

The brand is no stranger to sustainability and recycling. In 2015, Adidas created a pair of shoes in partnership with Parley for the Oceans, whose uppers were made entirely of yarns and filaments reclaimed and recycled from marine plastic waste and illegal deep-sea gillnets.

This year, the brand has taken a step further and created a pair of running shoes which are 100% recyclable and don’t have to be thrown away.

The running shoes, in fact, will be made out of reusable thermoplastic polyurethane (TPU) and will be constructed without the use of adhesives or chemicals. The result is a pair of 100% recyclable and long-lasting running shoes which can be easily returned to the shop where they will be washed, ground to pellets and melted into material for components for a new pair of shoes – guaranteeing zero waste.

French brand Sézane launched its sustainability and solidarity project two years ago, which includes a bag made from rhubarb-tanned leather and 100% biodegradable, collections made from 85% natural materials, ⅓ of their shoes and leather goods made from vegetable-tanned leather and their “La Grande Collecte” recycling scheme.

In particular, the scheme offers customers the opportunity to contribute to more sustainable fashion by giving used garments a second life. Each Sézane box received can be used to send back old garments, of any brand, for reuse or recycling.

In its home city of Paris, it has its own charity store where clothes in good condition are resold, with the benefits going to good causes. According to our study, some 38% of consumers would shop in a brand’s own second-hand store in order to consume fashion more sustainability, which is a more popular choice that shopping for used clothing on resale sites such as eBay and Depop.

This suggests Sézane, which also has a standalone store in London and a concession in Selfridges, could be on to something with this model. It also proves that offering own-brand vintage need not be competitive to a brand’s current season offer.

TheIndustry.fashion, via research experts Savanta, conducted an in-depth study of 1,000 UK consumers with a balanced spread of gender, ages and locations. Shoppers were quizzed on their current shopping habits, their plans for shopping for the next year, along with attitudes towards sustainability, influencers and physical versus digital retail, and their favourite brands. The results of “How Britain will Shop for Fashion in 2019 and Beyond” are due to be published in four major reports throughout May, June, July and August 2019. The full reports will be made available exclusively to members of The Intelligence or The Inclusive packages, which features such as these, with references to see key findings, will be published here in The Insight. To find out more about all of our membership plans or to upgrade, click here.