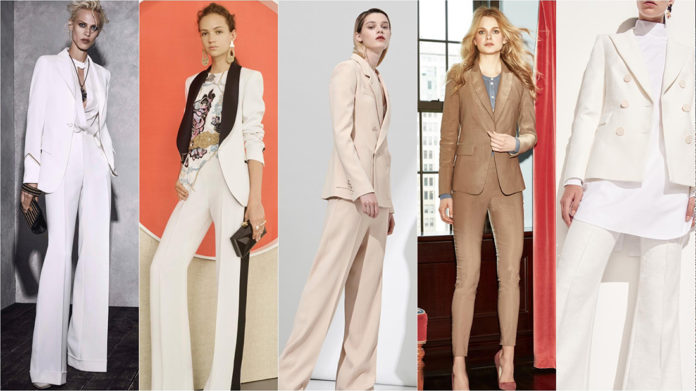 Powerful women in politics mean power dressing is key. But is there an alternative to the current “uniform”? Step forward the power pantsuit, says trend expert Sandra Halliday.

If there’s one thing that 2016 will be remembered for, it’s… no, not the B word. Well yes, 2016 will be the year that Brexit became a scary reality. But something equally astounding and rather more positive has also happened. Female politicians have moved centre stage.

The race to be PM is being headed by Theresa May and Andrea Leadsom. Everyone’s waiting to see what Angela Eagle’s next move will be in the Labour war of words. Nicola Sturgeon has cemented her position as the uncrowned Queen of Scots. Hillary Clinton has a lead in the US polls and Angela Merkel is doing what she’s been doing for years – running Germany and being the driving force in the EU.

That may not seem to have much to do with fashion but it does. It means the slightly-more-decorative look of “first ladies” like Michelle Obama and SamCam could soon be replaced by a more corporate approach to power dressing as politicians on both sides of the policy divide work hard to been seen as serious while dealing with constant, intrusive interest in what they’re wearing.

So, is it time for the power pantsuit to make a serious comeback? Designers releasing pre-collections seem to think so. Along with a host of other safe options in these oh-so-commercial collections, pantsuits are there as an alternative to the political/corporate power player’s current uniform of jacket over shift dress or pencil skirt.

A dark suit is the perfect “take me seriously” hardworking option for PMs or ambitious future PMs. Forget the industry’s love of angle-grazing trousers – that’s probably a step too far for most women with their eyes on the ultimate prize. Instead, a long leg that falls over your shoes emphasises height adds to the power effect. Dark suits should be kept slim but not too fitted, a body-skimming or gently waisted jacket atop slightly flared or cigarette-shaped trousers is the ideal subtle power statement. Mix it up slightly with a contrast colour jacket in ultra-safe navy blue.

A pale-toned pantsuit is a great after-six option and is a real standout piece when delivering speeches or for photocalls. Keep materials softly fluid with pre-season’s favourite gently flaring pant shape working well to add a leg-lengthening effect. Double breasted is making a tentative comeback but single breasted still works best for showing off a statement blouse or shirt to soften the effect further.

Colour rings the changes for pre-season’s pantsuits with tones of peach, burnt orange, pale pink and rusty raspberry the favourites. Worked in soft sheen velvets they really mean business but a matte effect looks strong too – especially when it’s a head-to-toe single colour or an offbeat contrast. Rich blues and greens also make the grade this season and are given an extra boost by working both with each other an offering up a slightly clashing effect. Political blues and greens working together? That would be interesting, especially given that Bally has added in some pinks to contrast further. Now if only it was red – perhaps they’d be trying to tell us something about a future coalition?

All the political rules have been broken since June 23 so perhaps some of the more on-trend flights of designer fancy might make the cut. No, I don’t believe it either, but it’s encouraging to see pantsuits moving in a less corporate direction. The season’s favourite florals feature heavily alongside core checks and stripes plus after-dark brocades. The heavy use of pattern also opens the door to moving away from the traditional pantsuit into a tunic/shell top and pants combo that’s probably best kept for pressing the flesh at a constituency party rater than delivering a speech in the House.