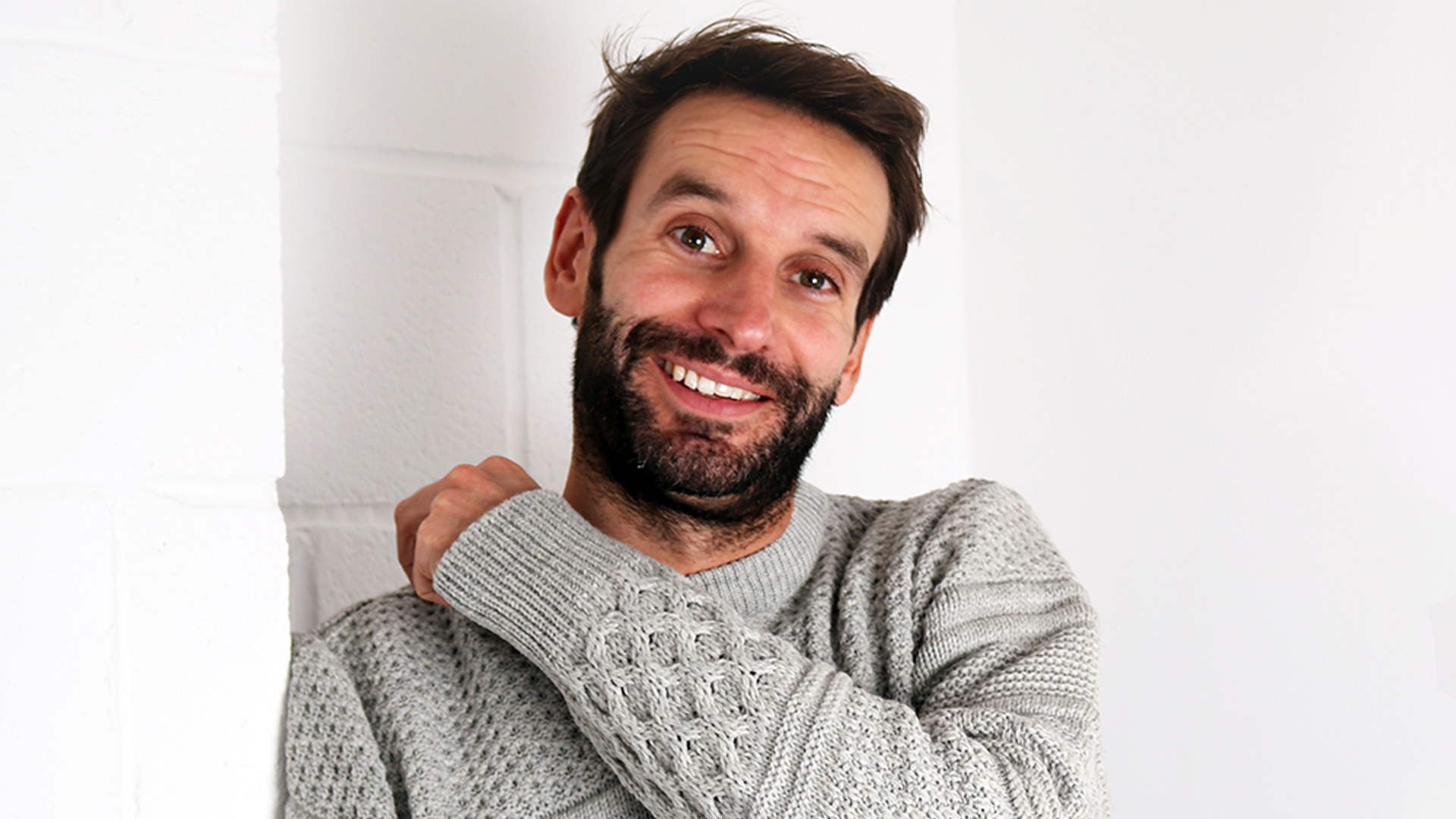 Heritage British knitwear brand Peregrine cemented its 225-year heritage by opening its first store at 78 Regent Street back in April, 2021, and a pop-up shop-in-shop in Selfridges at the end of October, provisionally set to run for one year, forming part of the iconic retailer’s Project Earth sustainability strategy.

Peregrine Managing Director Tom Glover, who joined as the eighth generation of the family business (originally founded as J.G. Glover in 1796) after graduating in design back in 2003, has, over the past 18 years, successfully re-established the Peregrine brand – the company’s own brand introduced by Glover’s great grandfather in 1956 – with clean and contemporary designs. Over the years, he’s introduced additional product categories such as outerwear – particularly waxed cotton jackets – shirts and accessories, all impressively made in England as the company has always put great emphasis on.

Based in Bristol, and with its own factory in Manchester, Peregrine controls every element of its garment production from start to finish, ensuring both full traceability and quality assurance.

With such a rich heritage, manufacturing expertise, design savvy and attention to detail, storytelling is something Glover can do in abundance. Hear the full Peregrine story on our In Conversation podcast, in partnership with Klarna, here. 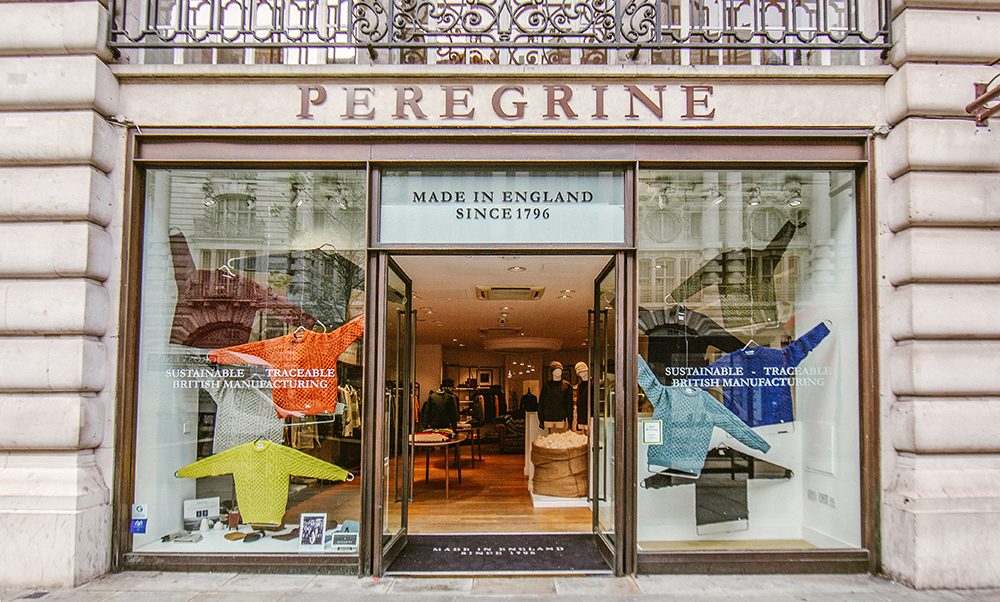 Glover said: “I grew up in knitwear factories, so manufacturing is what I know. The main business of J.G. Glover and Peregrine was as a manufacturer, which at the peak in the 1970’s used to employ about 300 people. Peregrine was the own brand my great grandfather introduced in 1956. Unfortunately, in the 80’s a lot of that UK manufacturing disappeared and the factory closed down in 1987, though my dad carried on trading.

“I graduated in design in 2003 and was interested in bringing the brand back to life again, trading on our history and going in to our archives. Also, I wanted to look at manufacturing in England again, because back in the early 2000’s there was really no English manufacturing to speak of, and I remember at the time everyone telling me not to get in to textiles because it’s dying. Being stubborn, I didn’t listen to anyone, and here we are now, nearly 20 years later!

"I started off going to fairs selling my knitwear products out of the back of my car, whereas now we’re in Selfridges and we’ve got a shop on Regent Street."

“The brand has grown hugely in that time. I started off going to fairs selling my knitwear products out of the back of my car, whereas now we’re in Selfridges and we’ve got a shop on Regent Street. It’s a great location and traffic is starting to pick up, though it will be better when tourists start coming back properly again. We also have about 100 stockists around the world now. We’re not a huge brand, but we have a really nice small following of people who appreciate English manufacturing and quality product. I’m very proud of the fact that 100% of everything we make is made in England.”

New for AW21, Peregrine introduced "Makers Stitch", a unisex limited-edition 100% washed Merino wool Aran knit jumper with a unique stitch handsewn on the hem. Each jumper can be traced back to the individual machinist in the Manchester factory, highlighting the close relationship with the maker. “It just makes it more personal,” commented Glover. 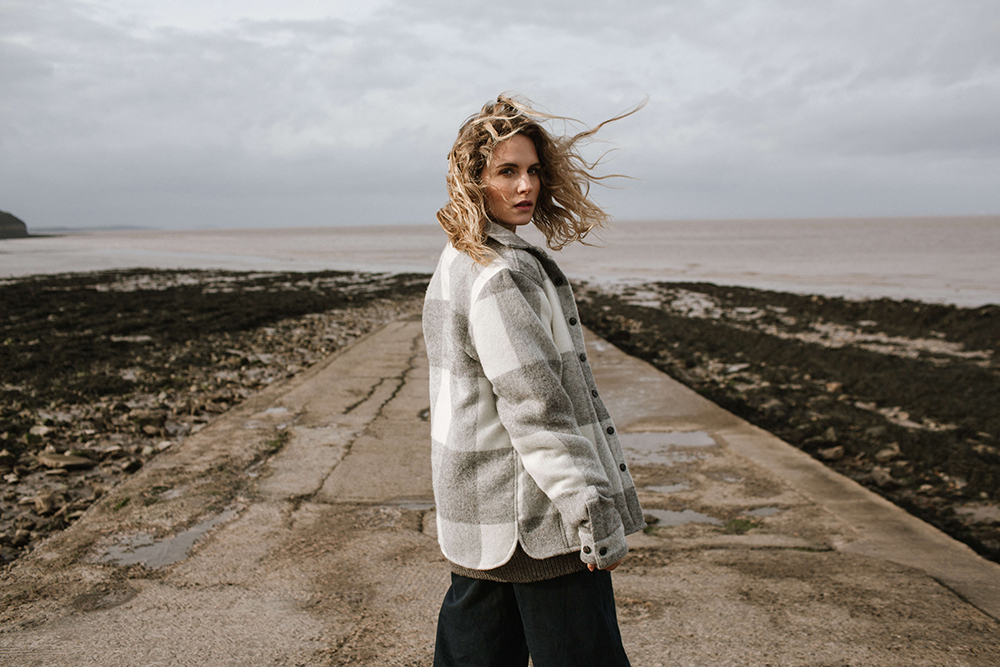 This season’s 540 sq ft shop-in-shop launch in Selfridges is likely to raise the Peregrine brand’s profile substantially, and it’s something that Glover hopes will continue long after the provisional year the pop-up is scheduled for. “We built the shop-in-shop with a knitted backdrop to give that authentic British handwriting to it. As a small, growing brand, selling in to places like Selfridges is always the dream, because it’s one of the best stores in the world. For me, as a designer, being in there was so important.

“They actually came to us and really liked what we do. We put together a presentation of our product and they absolutely loved it. They just bought from our range, including some long and some short Harris Tweed coats, and they also bought our British Millerain waxed cotton jackets. I think they just wanted something that little bit different and our price points are quite competitive compared to some of the other brands they have in there. 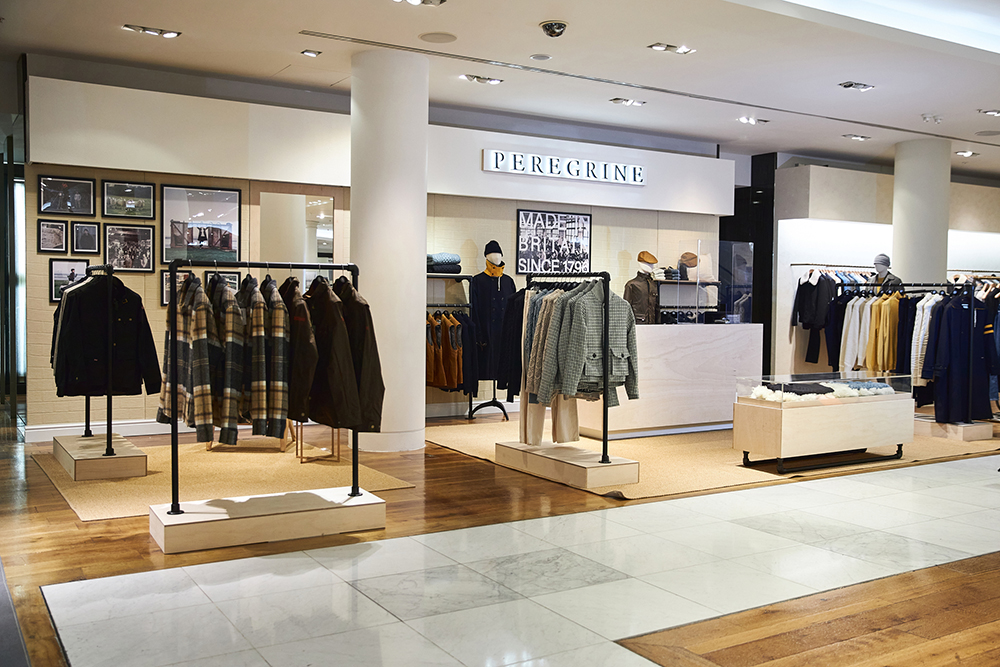 “The concept is working really well for us so far, and they actually repeated on orders after the first couple of weeks. There’s a lot of ‘bling brands’ in Selfridges, but we’ve got that wholesome natural feel which gives a point of difference. I think if we could get the same concept in to other stores around the world that would be amazing.”

Additionally, last month saw the introduction of the first range of children’s jumpers, designed to be mini versions of the men’s AW21 knitwear collection. The three styles are named after Tom Glover’s children and feature "Rexie", a polo neck, "Gracie", a Breton stripe jumper, and "Wolfie", a navy cardigan with stripe detail. All styles are unisex, knitted in 100% Merino wool and available in sizes 1-6 years.

Alongside its retail growth and product developments, Peregrine is marking its considerable 225-year anniversary milestone with new collaborations, including with fellow British manufacturers Goral shoes and Yarmouth Oilskins. Goral shoes have been handcrafting footwear for over 80 years, and Glover has designed a trainer with them for Peregrine which is 100% manufactured in the UK out of a hard-wearing Tweed cloth.

Established in 1898, Yarmouth Oilskins is an oil cloth manufacturer which makes practical workwear pieces. Peregrine has worked with the brand’s original high waist trouser silhouette, recreating it in corduroy to fit into the men’s AW21 nautical inspired range.

“The Goral collaboration came about because I just love their shoes,” said Glover. “I’ve always been looking at getting a sneaker made in the UK, as we have some beautiful shoe manufacturers here. We put a story together using the leftover cuts of Harris Tweed we had from our coats.

“As a knitwear and jacket manufacturer, it was also great to work with Yarmouth Oilskins, as everyone keeps asking me to introduce trousers. I spoke with them at the Jacket Required trade show a couple of years ago and liked what they do. So, I just wanted to put my handwriting in to what they do, and we’ve used a Brisbane Moss heavy cord for their trousers, as well as taking their canvas trousers and putting some Harris Tweed patches on them. It’s a bit of fun, it looks strong in our look books and it’s good storytelling.” 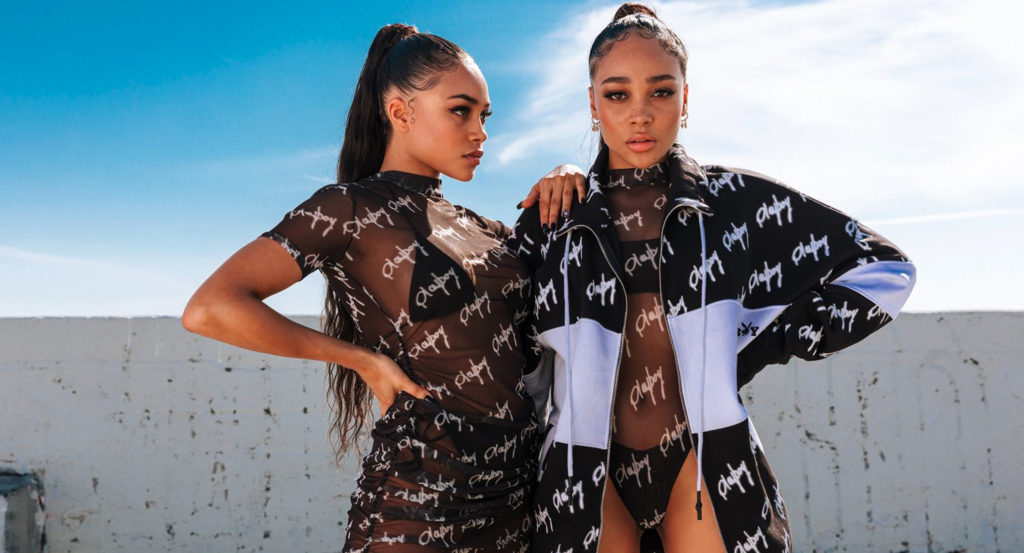 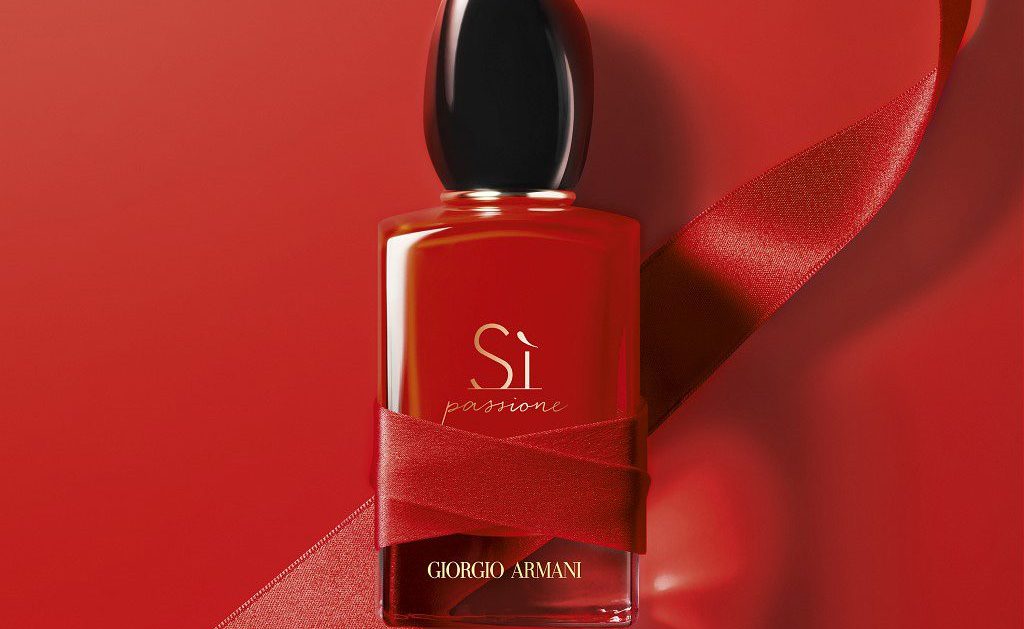 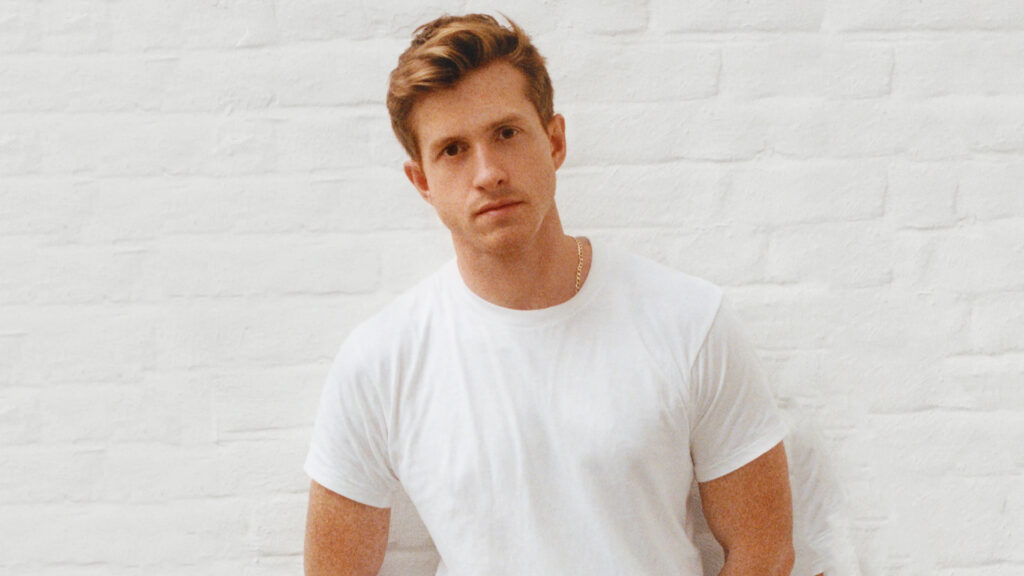