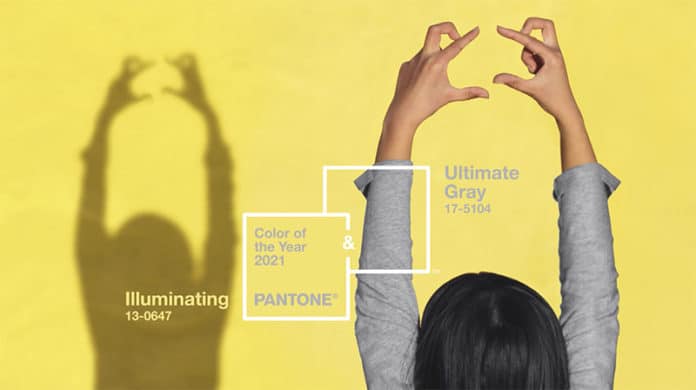 The Covid-19 pandemic in 2020 has brought world-wide problems and crises of an overwhelming magnitude. Along with many other sectors the fashion industry has been hit extremely hard.

Because of this 2021 without doubt gave the Pantone Institute one of the greatest challenges in its 20 year history when it came to choosing its famous “colour of the year”.

Colour selection is more important than ever as consumers look to gain more from purchases. How colour makes you feel and how these choices fit into the way we work and live, has changed so much since March. With this in mind two colours have been selected, both backed with stories, which will have huge relevance during 2021. Pantone describes them as “two independent colours that highlight how different elements come together to support one another”.

First is soft yellow PANTONE 13-0647 Illuminating. Yellow was a hot colour trend around 2018 when it was known as Gen Z yellow. This had been a global success and it was the first time in my 20+-year career that a bright yellow tone had been both a popular topic for discussion and a commercial success. I believe that much of this success was due to both its ability to look good on social media and be gender neutral, both which of course are two of the most relevant topics of the recent years.

Yellow’s biggest asset, however, is its ability to bring positive energy. It is the colour of the sun, which brings life, cheer and vitality. Iluminating is softer than Gen Z yellow, which was brighter and harder to wear. Its softer whiter glow has a more modern flavour that feels so right for now. Many of the harsh bright tones of previous seasons are also evolving in this direction. lluminting’s softer level sits between a bright and a pastel.

It still has enough brightness to stand strong online or on Social Media, which is a really important consideration when working on colour selection. This said, its softness makes it more relevant to the market, and much more open to different product types. It works equally as well on soft dresses and tailoring as it does on activewear and youth led cut & sew. The softer appeal is critical as the fashion industry strives to be even more diverse and open to all age groups who love to wear colour, and not just pinpointed on the younger generations.

Pantone’s second colour of the year is PANTONE 17-5104 Ultimate grey. This offers a feeling of security as Pantone partners illuminating’s sense of happiness with Ultimate greys message of fortitude.

The return of Grey is a trend that I have been tracking for some time. For starters  it is super commercial. The ultimate foundation colour which partners really well with all brighter tones.

This colour which first emerged as a fashion tone during the 90’s where sat within the palettes of minimalist collections by designers such as Calvin Klein and Helmut Lang. It was also the time when designers such as Donna Karan were pioneers of the modular wardrobe where ones wardrobe consisted of several pieces that could be adapted and  worn depending on the needs of apparel for each day.

Viewing fashion this way is as relevant today as it was in the 90s. We see 2021 as the time when minimalism will be reborn as a key trend. This time, however, the focus is on lifestyle function and adaptability, as we look for our wardrobes to take us from working from home, to video meetings and to the office.

PANTONE 17-5104 Ultimate grey lives up to its name as being the ultimate tone to sit at the heart of such a modular collection. It will work through from jog pants to blazers and dresses.

This colour has a gentle warmth to it, which despite being cold in its core makes it less aggressive and more flattering than more blue tinted greys.

Ultimate grey’s relevance will be key to 2021 and beyond and its all-season appeal will definitely be a great foundation for a few years to come.

Jane Boddy is a leading colour forecaster. To find out more go to www.JaneBoddy.com.