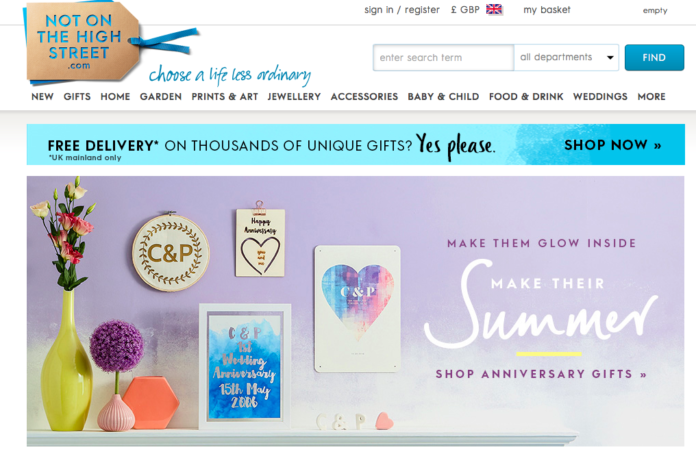 The funding round (Series E) was led by Burda, one of Europe’s leading media and technology companies, with additional support from existing investors including Index Ventures, Industry Ventures and Eight Roads Ventures. It comes on the back of a 19% growth in year-on-year sales at Notonthehighstreet.com, its tenth consecutive year of double-digit growth.

CEO Simon Belsham outlined the following priorities for the investment:

– Further invest in the technology, innovation, marketing and operations to allow the company’s 5,000 strong and growing Partner (seller) community to connect with more customers and scale their businesses using Notonthehighstreet.com’s technology platform

–  Continue to build Notonthehighstreet.com’s core gifting offer, expanding categories and developing the customer experience both on and offline

–  Open up Partners’ access to new markets, and build the business’ international vision

The company specialises in giving a platform to independent sellers of unusual and quirky items. “Notonthehighstreet.com was born out of the belief that customers want products that are more thoughtful, unique and personal and that, through technology, we could connect thousands of independent businesses – the makers of these great products – with customers around the world. This purpose remains even more relevant today in a world where customers are craving something more than the ubiquity of the mass market,” said Belsham who joined the business from Tesco.com last year.

“Finding an investor that shared our vision and could provide strategic support, as well as new funds to support our multi-year growth plan, was key. Burda has a longstanding reputation as an investor in cutting-edge consumer and technology businesses and an international reach that will help us accelerate the potential we see both at home and overseas,” he added.

The investment comes as the Kew, Surrey-based company reports its sales for the 12 months to 31 March 2016 when sales (or TTV, total transaction value) were up 19%. Underlying EBITDA showed a loss of £1.6m, which was an improvement on the EBITDA loss of £3m for the same period for the previous year.

As well as Balsam, it also made a number of senior hires during the period including Darren Shapland, Chairman; David Phillips, CFO; Hugh Fahy, CTO; and Hannah Webley-Smith, Customer Director.

Belsham added: “It has been an incredibly exciting 12 months for Notonthehighstreet.com, marked not only by this new investment but another year of strong growth and several significant senior hires that put strong foundations in place for continued success.”

Hubert Burda Media currently holds a portfolio of consumer-related digital businesses and has a track record investing in entrepreneurial companies. Current investments include XING, the number one business network in Germany and Europe. Burda is also behind one of Europe’s biggest and most influential digital and innovation conferences, DLD (Digital Life Design) and publishes a number of key media titles including Wedding and Your Home in the UK, as well as Elle, Elle Decoration, and InStyle in Germany.