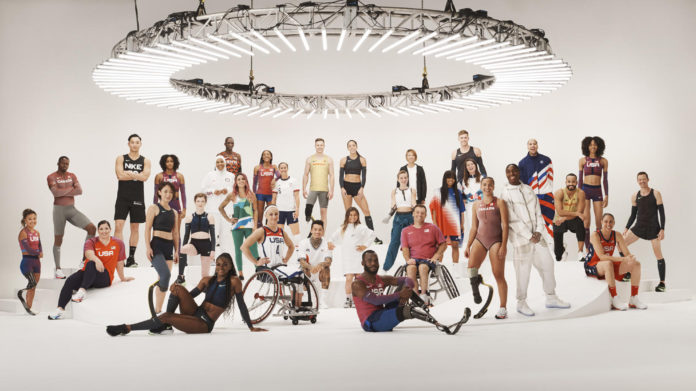 A number of prominent designers were present at the showcase including 1017 ALYX 9SM’s Mathew Williams, Virgil Abloh and Simon Porte Jacquemues. However, the most important presence was the appearance of Nike-sponsored athletes, such as basketball player Diana Taurasi, US high jumper Vashti Cunningham and famous skateboarder Sky Brown.

This is not the first time the sportswear giant has showcased a brand event for influencers and media, although using the runway to showcase its collection is something out of the norm for Nike. The collection however was presented in a traditional runway form with models wearing Nike’s newest collections.

The highlight of the show included the use of Olympics heroes such as Brandi Chastain, Carl Lewis, Joan Benoit Samuelson and Lisa Leslie trailed by Nike’s current group of high profile athletes including future Olympians. The collection also paid homage to the Late Kobe Bryan by having children walk down the runway wearing the late US legend’s jerseys. During the show, six kids walked the runway modelling oversized black, yellow and purple Lakers jerseys featuring Bryant’s numbers 8 and 24.

In a generation where runway significance is being questioned, Nike’s showcase still caught the attention of many. The sportswear giant has used the show as a strong branding technique by using the runway as a narrative tool to reveal its product plans for the future.

Recent financial quarterly reports showed Nike’s revenue was up 10 percent year-over-year to $10.3 billion. In general revenue surpassed analyst expectations, while sales in North America continue to struggle as this province continues to be a challenge for Nike.

The power of the global brand was highlighted on Wednesday combined with its items being sold at Dover Street Market and Kohl’s with no consequences. Most fashion shows end with a bow from a designer, however this was not the case at Nike’s runway collection, this was a powerful statement which made the brand stand out and caught the attention of audience.