There was a time when “if you build it, they will come” rang true for retail. Large out-of-town sheds have been encouraging people to pile into their cars since the 1980s. But, traffic is slowing and retailers are starting to realise that in order to survive, you need to go to the people, because they won’t be coming to you.

People’s time is precious and the thought of driving to a shop, potentially getting snarled up in traffic or fighting for a parking space, when you could simply go online, is making these expensive retail parks less and less viable. Following the march of the supermarkets with their local formats other retailers are now realising it’s all about ease and convenience if you’re going to compete with online. Mix in the fact that car ownership and young people passing their driving tests is falling, then you have a perfect storm for the retail parks and out of town shopping centres.

In a sleepy suburb in South London, Wallington, Zone 5, home and DIY retailer, B&Q, has just unveiled its new smaller format, “GoodHome by B&Q”. The new, boldly coloured and contemporary space offers automated key cutting machines, touch screens to browse the range, a complimentary coffee machine and “over 6000 products available today”. It is a warm, compact space with friendly staff to offer advice, in comparison to one of their rundown, draughty mega stores, run on a skeleton staff, without anybody to help or offer advice. This is the first of these neighbourhood B&Qs which they hope to roll out nationwide.

In October, 2018, IKEA, the ultimate in out-of-town-spend-all-day-and-dine retailers, opened its brand new mini store – the IKEA Planning Studio – on London’s Tottenham Court Road. It specialises in kitchens and bedroom storage and is more a showroom than a smaller version of the larger store. This week, IKEA launched its first store in central Paris. “Paris is a magnet of trends and fashion,” said Jesper Brodin, chief executive of the main retail arm of Ikea, Ingka Group. “We hope to use the Paris store as a loudspeaker for the rest of the world. If we are successful we could do a lot more of these.” he told The Financial Times.

The new IKEA store in Paris is 5,400 sqm across two floors and includes a 150-seat restaurant. About 1,500 items are available to buy in-store. Located in Paris’ 1st arrondissement, it will be followed by similar openings in Lyon and Nice. “There’s not a typical online customer or offline customer; people are mixing channels,” said Brodin. “They still want to be able to touch the product and have a physical experience of the product”, he said. 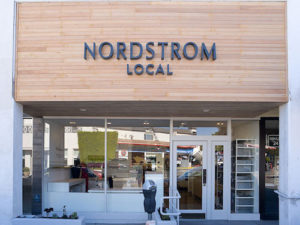 Over in America, the luxury department store chain, Nordstrom, is rolling out its “Nordstrom Local” formats. First trialled in California, it is now planning two in New York to complement its new full line department stores opening at the end of summer 2019.

According to the company’s research, Manhattanites don’t particularly want to leave their neighbourhoods if they can help it which is the crucial reason for adding these hubs. The smaller stores will not carry merchandise, they are places for online pickups and returns, as well as services like tailoring and personal styling.

The first Nordstrom Local opened in 2017 in Los Angeles, where it, now, has three shops. Some offer individual services, like manicures or shoe repair, based on their location. Most importantly, the company said customers who visited a “Local” spent on average two and a half times what other Nordstrom shoppers did and made returns earlier, which allows the retailer to turn its inventory faster.

What many large retailers and shopping centres rely on is the car and the attraction of free and easy parking. Government-backed research shows that the number of teenagers holding a driving licence has plummeted by almost 40% in two decades.

The study, published in February 2018, said that rejection of car ownership was likely to become the “new norm” as more people communicated online rather than face to face.

Commissioned by the Department for Transport, it found that changes in living circumstances meant that most young people no longer gained a driving licence or regularly drove a car. It said that a rise in lower-paid and less-secure jobs, a decline in home ownership and an increase in university participation had an impact on how people used transport. The study also cited the high cost of driving and a preference among young people to communicate online. It quoted figures showing that young men aged 17 to 29 were spending 80 minutes more per day at home in 2014 compared with 1995. Women in the same age group spent 40 minutes more at home.

The study by the University of the West of England in Bristol and the University of Oxford, said that many young people had become “accustomed to a lifestyle in which private car use is less central than it has been for previous generations”. The report added: “It is possible that the changes in young people’s travel behaviour described above are the first phase of a social change that will continue through successive generations.”

It is already starting to take its toll on shopping centres with footfall down and retailers reducing the number of stores they run or open. At the beginning of this year, shopping centre landlord Intu took a £1.4bn hit on the value of its properties. Intu said the value of its portfolio dropped 13.3% to £9.2bn during the year. The drop in property values pushed the company to a loss of £1.2bn, down from a profit of £203m a year earlier

Retailers are realising that transport is key and is where the volumes of people are. Walk through St Pancras station or New Street station in Birmingham, and the range and quality of the stores is nothing like the sad Upper Crusts or Boots of a few years ago. From Tiffany to Ted Baker, these stations are much more glamorous and attractive places to quickly pick things up or drop things off than they were before and compete just as well with any modern shopping centre.

One British retailer proving the value in travel retail is W H Smith. W H Smith could have disappeared like its main products; magazines, newspapers and music or been flatlined by Amazon on books, but instead has flourished by going for convenience and the captive audience of people in stations and airports.

Since WH Smith demerged its news distribution business in 2006, the travel business has been able to grow its profits in every year since. The size of the business has increased from 309 stores in 2007 to 867 in 2018. With the acquisition of American airport retailer, In-Motion, it will probably have more than 1,000 stores by August 2019.

WH Smith had 581 stores in the UK at the end of August 2018; 149 were at airports,127 in railway stations and 131 in hospitals. Around 125 are located in motorway service areas and are franchised stores, with the remainder in workplaces and bus stations. Internationally, it had a total of 286 stores located in airports, recently opening eight stores in Madrid Terminal 4 and six outlets in Rio de Janeiro. While not the most exciting of retailers, it shows that you can thrive if you go where the people are.

Smaller and more cost-effective neighbourhood shops could be the answer for some brands. Businesses built on big stores will need to think about how people get to them if they are to survive. The automated car will offer some relief to the out of towners, if and when it arrives, but it feels like it will continue to become a strange concept to drive large distances out of your way to go shopping, especially for the younger generations.