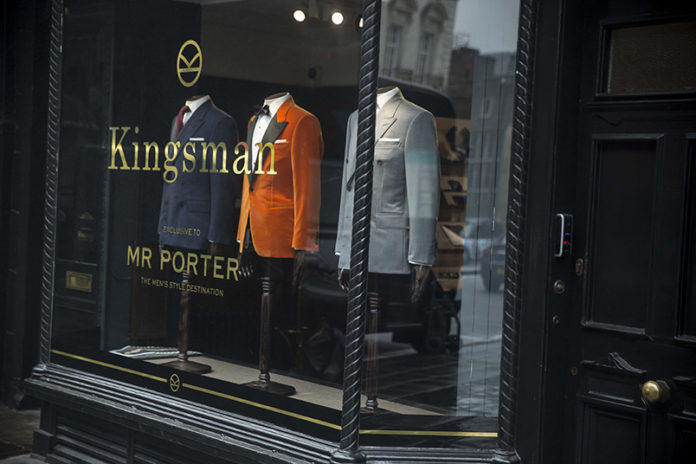 Mr Porter is to open the world’s first Kingsman store to mark the launch of its second Kingsman “costume to collection” line and the release of the upcoming film Kingsman: The Golden Circle.

The store opens on 8 September next to the renowned wine merchant Berry Bros. & Rudd in St James’s, a location celebrated for its men’s outfitters but which also plays an integral role in the film. This means customers will not only be able to shop the film’s clothing collection but also enter one of its authentic locations.

The Kingsman collection available in-store will include ties and pocket squares by Drake’s, opticals and sunglasses by Cutler and Gross, cufflinks and keyrings by Deakin & Francis, Kingsman fragrance by The Perfumer’s Story, notebooks by Smythson, socks by Corgi, umbrellas by Swaine Adeney Brigg, pens by Conway Stewart and the TAG Heuer Connected Modular 45 Kingsman Special Edition watch.

Additional pieces on-display are available for purchase on the MrPorter.com site and include suits, Western blazers and shearling coats by Kingsman, shirts by Turnbull & Asser, shoes by George Cleverley, jackets by Mackintosh, glass decanter sets by Higgs & Crick, headphones by Bowers & Wilkins, varsity jackets by Golden Bear, Western boots by Lucchese, gilets by Rocky Mountain Featherbed, track tops and trousers by Todd Snyder, sneakers by adidas, boots by Hunter, denim pieces by Jean Shop and leather outerwear by Mister Freedom. These pieces will be available for next-day delivery in the UK.

In addition customers will be able to interact with a duo of digital experiences within the Kingsman Shop: a digital hub revealing the special elements of the TAG Heuer Connected Modular 45 Kingsman watch, and a touch-activated mirror housed within the changing room, showcasing styling tips for a curated selection of Kingsman and Statesman products.

Mr Porter managing director Toby Bateman hailed the move as an “innovative milestone” in the luxury men’s retailer’s partnership with the film, its director Matthew Vaughan and costume designer Arianne Phillips. Vaughan and Mr Porter had first teamed up on a collection to mark the launch of the first Kingsman film, Kingsman: The Secret Service starring Colin Firth, in 2015 and the collection has been an on-going feature on the Mr Porter site since then.

“We are thrilled to be opening our first ever transactional shop with Kingsman, to celebrate our ongoing partnership and to mark the September release of Kingsman: The Golden Circle. The costume to collection range remains one of the most unique and pioneering unions of fashion and film, and this shop is just another innovative milestone for the partnership, and for Mr Porter as a whole,” Bateman said.

Director Vaughan added: “Kingsman has been the perfect opportunity for us to create our own label inspired by both Kingsman: The Secret Service and Kingsman: The Golden Circle. After the first film, we were successful in launching a new luxury brand that translated directly from the screen, and had relevance and resonance in both the fashion and film industries. And now we get to take that experience a step further in opening the Kingsman Shop, and bringing the film’s setting to life for customers and fans alike.”