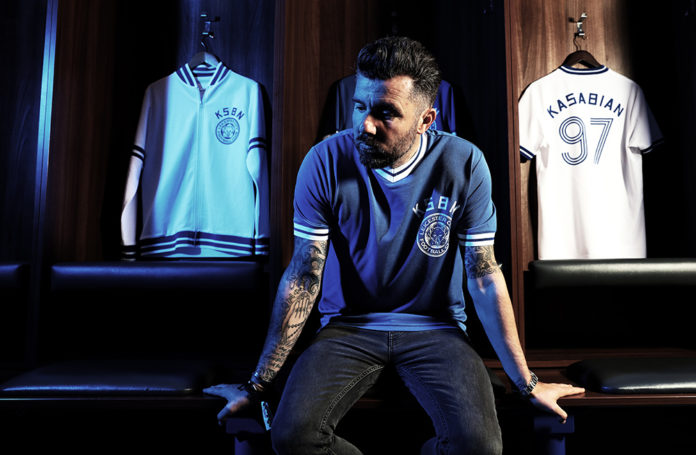 The collection, which was created in partnership with merchandise and brand management company Bravado, will be sold on the club’s website and in its City Fanstore at King Power Stadium from mid-June. It features track jackets, slogan tees and retro football shirts, all of which include the LCFC crest and Kasabian logo, as well as incorporating the dates both the club and the band were formed.

Kasabian’s Serge Pizzorno designed the KASABIAN for LCFC line and said of the collaboration: “It has been a true honour for us to design a range for the mighty LCFC. Clothes that can be worn on the terraces or in the mosh pit.”

The band are well-known fans of the club and performed at the Club’s ‘Champions’ party at the end of the 2015/16 season followed by two sold-out nights at King Power Stadium.

“Kasabian have a deep personal connection and history with Leicester City, culminating in last summer’s triumphant shows at King Power stadium. KASABIAN for LCFC is an exciting project for Bravado to help bring to life, and the perfect opportunity to create a bespoke and distinctive clothing collection together. We are excited for fans of the band and team to see the collection and to collaborate again on future collections,” said Bravado UK managing director David Boyne.

Head of Retail at Leicester City Football Club, Matt Payne, said the club had a proud stance at the forefront of football fashion. “[…] we are always looking to launch innovative ranges and work with iconic brands and names; this collaboration with Kasabian definitely achieves this. We are really excited for the launch in June, and we cannot wait for our supporters’ reaction,” he said.