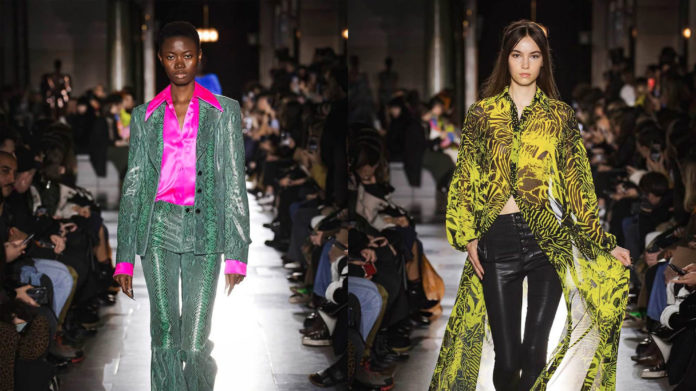 LA based denim label, J Brand has partnered UK-based designer Halpern on a new capsule collection which was presented as part of the Halpern AW20 show during London Fashion Week.

The J Brand x Halpern collection will be available online across international shopping platforms from the end of August 2020.

The capsule was created in line with the denim brand’s sustainable practices with J Brand having committed to using sustainable technology on 100% of all washed denim by the end of 2020.

This is the latest in a line of designer collaboration for J Brand, which has also partnered with well known names from the luxury fashion world including Christopher Kane, Simone Rocha, Proenza Schouler and Bella Freud.

Halpern designer Michael Halpern began his career in New York having graduated from Parsons School of Design, before coming to London to study for a masters at Central Saint Martins. After graduating he was hired as a consultant by Atelier Versace and went on to launch his own label in 2016.

His designs quickly become recognised for their opulent and glamorous aesthetic after his debut during the AW17 shows at London Fashion Week. After his showcase, the Halpern label was stocked in leading luxury retailers and etailers including MatchesFashion, Browns and Bergdorf Goodman.

In addition, the designer also won the British Emerging Talent for Womenswear Award at The Fashion Awards, organised by the British Fashion Council in 2017. Halpern’s collections have been worn by a number of high profile celebrities including Amal Clooney, Lupita Nyong’o and Adwoa Aboah.

Tommy Hilfiger also showed his on-going collaboration with F1 star Lewis Hamilton, which was extended this season to include input from Grammy Award-winning R&B singer H.E.R.