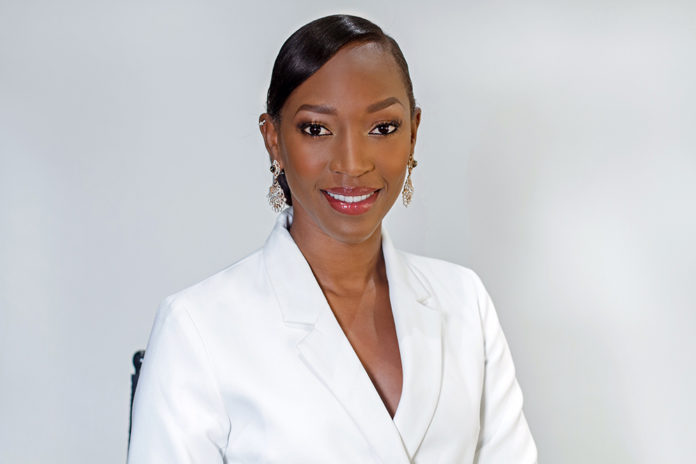 On the eve of her appointment as publisher of British Vogue, a move announced earlier this week, Vanessa Kingori MBE, who for now remains publisher of British GQ, spoke to fashion recruitment expert Renée Waters, on behalf of The Industry. She discusses her career experiences to date and the best practices she employs to lead successful and diverse publishing teams.

Kingori is used to breaking ground. She was the first woman to be named publisher of British GQ in the magazine’s 30-year history, having served at Condé Nast for eight years. She was also the youngest, first female, and first black publisher of any magazine under Condé Nast UK publications.

Prior to joining the high end publisher she held roles at the Evening Standard’s ES Magazine and at Hearst UK where, while working at Esquire, she was awarded “Hearst UK Salesperson of the Year”.

In recognition of her stellar career Kingori was awarded an MBE in the Queen’s Birthday Honours List in 2016 (co-incidentally Edward Enninful, Vogue‘s newly appointed Editor in Chief and its first black and first male editor, was awarded an OBE on the same day). She is also a member of the Mayor of London’s “Brexit Expert Advisory Panel”.

On 22 December 2017 Kingori will replace Stephen Quinn, who retires from his role as publishing director of British Vogue after 26 years as announced by Albert Read, managing director of Condé Nast Britain, earlier this week. She will then be overseeing the masthead of the most venerated of women’s fashion magazines; interesting as in June of this year she was named by the same publication as one of its “10 Women Shaping British Menswear”. So that’s her success story, how does she go about ensuring the teams around her are equally as effective?

As a best practice in hiring new people to join a professional organisation you must first establish the best culture for nurturing employees, assess the needs of your teams, and then formulate a plan to acquire the best talent and for Kingori that comes from flexing her network to discover what talent might be available for her to acquire “For [my teams] we operate on a word of mouth basis. It’s important when running a small team to identify the right skill set and personality,” she says.

As any organisation may experience there are challenges to getting referrals, which may be diverse, so Kingori counts on her personal relationships. “If we have a vacancy we go to University of Arts,” she says, to see what courses are comparable to the roles on her team so they can recruit from the school. Her relationship with the school extends from her role as Visiting Fellow for the last four years. “They understand what I’m like and they have a great diversity profile. They have the best of both worlds which is word of mouth [referrals] and the right skill set,” she explains.

For Kingori it is vital to stay connected to all facets of the industry for seeking both new and experienced talent. Her fellowship at University of the Arts London includes supporting students in panel discussions, evaluating student works, and mentoring. This is key in nurturing skills before talent is released into the industry.

“It’s important to hire with an overview,” Kingori states. There is no ‘manifesto’ but rather she speaks with her teams regularly about what it takes to be successful so they all know what they need to look for in identifying new members of their team. She also discusses plans with her team to identify any skill gaps as a measure of self-reflection.

As standard practice her teams collectively interview people, she then reviews the shortlist and then personally interviews her selected candidates. “Diversity is as important as skill-based hiring. You have to cast a wide net. I focus on the talent first then diversity of talent plays a key role.” Kingori believes these practices “can yield brilliant results when people look for diverse talent”.

When discussing the industry as a whole Kingori knows we have a ways to go until diversity is not simply a trend but rather the ‘norm’. “We all still have work to do in regards to diversity. I focus on the ‘why’ rather than the ‘whom’ for hiring practices,” she says. Her teams don’t believe in hitting quantities as a forced requirement but rather believes in hiring top talent to strengthen their teams. “We don’t want people to just think they were hired to hit quotas.”

In 2015, the Society of Human Resource Management (SHRM) released a report, Business Human Capital Challenges, on developing future leaders. One of the better traits of an effective leader is the ability to spot talent and place them in positions where they will gain and contribute skills within a team. Some people call it delegation but Leadership & Development professionals refer to this as ‘coaching’. “One of the biggest challenges in the industry is the lack of movement. Some people stay in places a long time but brands are moving in new spaces creating new areas of talent,” Kingori explains.

Other challenges include the perceived imbalance of value placed on the education that a candidate may have. Some hierarchy is placed on where people have studied versus the talent they demonstrate. These are the opportunities to hire people with diverse backgrounds that may represent different audiences “so we’re coming up with creative concepts with our partners.” These challenges may be difficult in building a workforce but receiving the return on investment in training teams is worth it in the long run.

One way to foster organic growth and development is to create a culture of cross-training and nurturing successful tactics from new employees joining from outside the organisation, so the company is not siloed. “I look at what friends in other places are doing,” as a temperature check of the industry she says. Kingori’s teams don’t make decisions “just to free up their headcount”. She employs a “buddy system” so if someone is lacking in digital savvy, for example, another member of the team is paired with that person thus increasing the overall diverse skill sets of the team. “Any new direction may be scary for people,” Kingori states.

She uses the leadership style of ‘shepherding’ people in new directions so that her teams trust she is making decisions for the whole of the group to be successful. She recognises that you have less resistance when you approach hiring needs with the thought of “what is good for the business?” What is good for the business of publishing? Having the right team skills to carry out the organisation’s objectives, both commercial and editorial.

Kingori is definitely a leader to follow if you are looking for corporate growth. During her tenure at British GQ, Kingori’s direction has led to the highest total annual revenue for the magazine in the last decade and her teams doubled the digital revenue on the relaunched GQ website. No doubt her success will follow when she becomes the publisher of British Vogue at the end of the year. We’ll all be watching with bated breath for what comes next from that exciting new team.