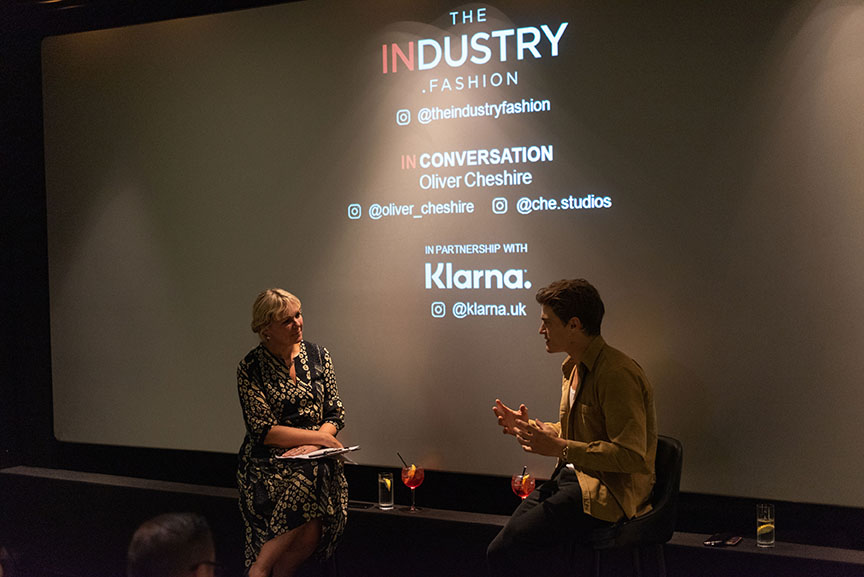 In Conversation with: Oliver Cheshire

Top British male model Oliver Cheshire, who’s appeared on runway shows and in campaigns from some of the leading global designer brands, such as Calvin Klein, Versace and Dolce and Gabbana, as well as being the menswear "face" of Marks & Spencer, recently launched his very first own collection called CHÉ, focusing on resort wear. Last week at the W Hotel in London’s Leicester Square he shared his early experiences, and talked about his new venture, with an audience – hosted by TheIndustry.fashion’s co-founder, CEO and Editor-in-Chief, Lauretta Roberts in partnership with payments provider Klarna. Here are some highlights of the conversation.

Lauretta Roberts: How were you originally scouted to be a model at 15?

Oliver Cheshire: My brother’s wife had some tickets to go to The Clothes Show and I went along. A guy came running up to me and said he’d like to take some Polaroid pictures of me. I didn’t get signed straight away, but I got asked to go in to Select model agency two weeks later. My whole family came with me! I did some more Polaroids and then I started modelling at 16. I was going to be a fireman, and I loved acting. My dad’s a fireman, but he said there’s no money in the fire brigade – become a model! My first job was a shoot with Tank Magazine, and a few weeks later I got a call from Calvin Klein asking me to fly to New York and meet him. I went to an audition, and there was loads of good-looking guys there, which I thought was terrible for my outlook! I queued up and showed my book. A few hours later, I got a call saying I looked too young because the girl who the shoot was going to be with would look old next to me. Then, a few hours later, I got another call saying they wanted to test me with her L.A. So, I tested with her and ended up getting it. I remember sitting in a trailer on the set and there was an American male model in there on the phone saying "this pale little British guy just got the job!"

Oliver Cheshire: The mainstream jobs did not come for the first 10 years of me modelling, at all. In fact, I don’t think I really earnt any money for the first five years. It was mainly free editorials and campaigns that didn’t pay. It wasn’t a bad thing, it was kind of like my apprenticeship. Then you get more known and respected, and the more commercial and better paid work comes along. That’s the journey of a male model really. It’s also where I learnt my passion for clothes.

LR: What was it like when M&S put you in their swimwear and sales spiked by 50%?

OC: It’s a nice thing to happen for sure. I look at the industry and it’s women who seem to have the long-standing relationships with the fashion world much more. Female models work for brands for a long time, but male models seem to be more of a throwaway commodity. Photographers are always looking for new faces. So, it’s great to have that relationship and family element with M&S, as I do now. You can talk openly about what you think of the clothes.

LR: With the launch of CHÉ, there’s plenty of brands who would have collaborated with you, so why have you chosen to do your own thing?

OC: You have a lot of time on your hands as a model generally, and it’s just something that has always intrigued me – the actual start point of a brand. I’d turned 30 and I’d been talking about owning my own label, and had built mood boards and collected materials. So, I just thought, do it. I started sending out emails, and a family friend of my partner, Pixie Lott, owns his own production facility and he has a background in fashion. I went to him, showed him my designs and it kind of went from there.

LR: What made you initially start with resort wear?

OC: I wanted to do something I know a little bit about and was respected in – so with a swimwear vibe. I also kept seeing loads of beautiful women’s bikinis and new brands popping up, but there wasn’t really that many men’s brands. I’d worked for Orlebar Brown and I know Adam Brown really well. I thought I’d like a piece of that pie, if I can. I did tell him I was going to do it! I looked at his competitors, and there was nothing that really excited me. We looked through a lot of old photos, and what I liked and what I thought was going to be thought provoking to make people talk about it, and make press want to write about it. Che is my little brother’s name, and obviously the first three letters of our surname. Growing up we always seemed to have posters of Che Guevaraaround the house as well, my dad loved him. Also, in Spanish it means friend, so it worked for me, and you could get the domain as well – so that was a plus! It’s really hard to find a domain that’s not taken these days.

LR: Are you hands on when it comes to the design side?

OC: Yes, I love it, my passion is menswear. We do have a designer, but it’s completely all my vision. The response has been amazing, people are buying it and we’re getting a lot of returning customers. It’s premium product but the price points are good, as the shorts start at £80 and the shirts at £70. All of our luxury swimwear competitors charge a lot more, in between £150-£200.

LR: How have you gone about marketing the brand?

OC: I’ve played to my strengths. I called up all the top models I know at my agency and told them I was flying them all to Nice on the French Riviera for a shoot! Then I phoned up a good photographer friend and secured his services. I wanted a big group shot, as I don’t believe that start-up brands have those epic campaigns – you don’t really see them, and they are very expensive, but it was what I wanted to do, and I could do it on the cheap. I wanted it to be a really impactful group shot, super sexy and retro.

LR: What is the eco-friendly element to the offer?

OC: I’m not going to stand here and say I’m an eco-warrior, but I do believe that all new businesses – with all the information we have now and with the new materials that are out there which are so amazing, then why not? It made sense to me. But, being an eco-brand and solely selling online I think it can scare people. I would never have felt a recycled piece of nylon before I started to make my shorts out of it. We get a lot of emails asking what recycled nylon feels like, and it feels exactly the same, but there’s still that kind of reservation that it can’t do because it’s made from some old fishing net that’s come out of the sea.

Oliver Cheshire networking with guests at the Martini cocktail reception

LR: Have you spotted anyone wearing CHÉ yet?

OC: I did recently at Manchester Pride. One of my mates ran after him for a selfie with me – I loved it more than him! That was the first time I’d seen a piece of CHÉ out in the wild, so to speak.

LR: What does the future of CHÉ hold?

OC: We are going to go in to a department store next year. We didn’t really set up for that, we were always going to be online, but it’s exciting because then customers will be able to feel the fabrics and try our products on. I think that’s important.

TheIndustry.fashion In Conversation events are proudly staged in partnership with www.klarna.com 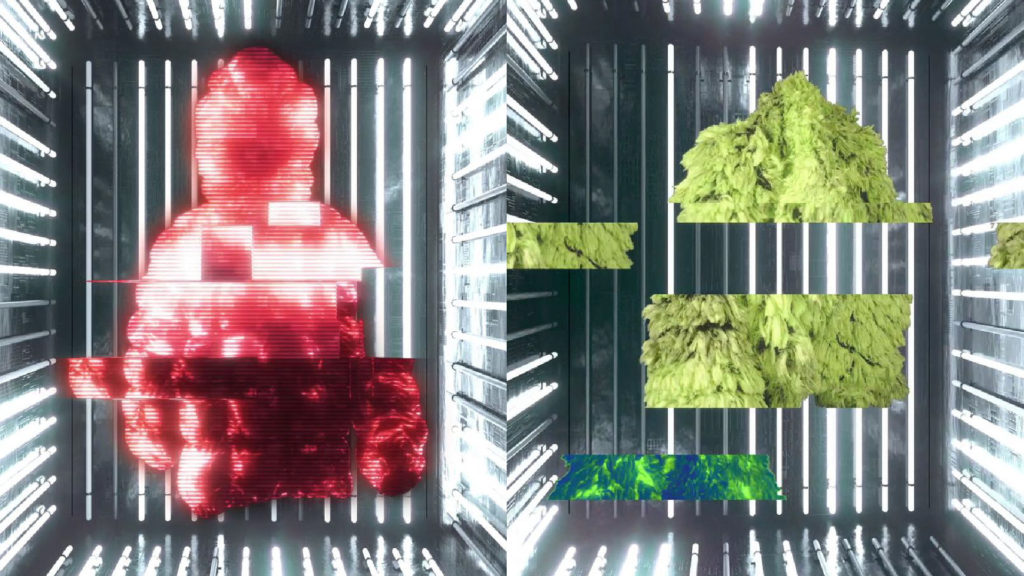 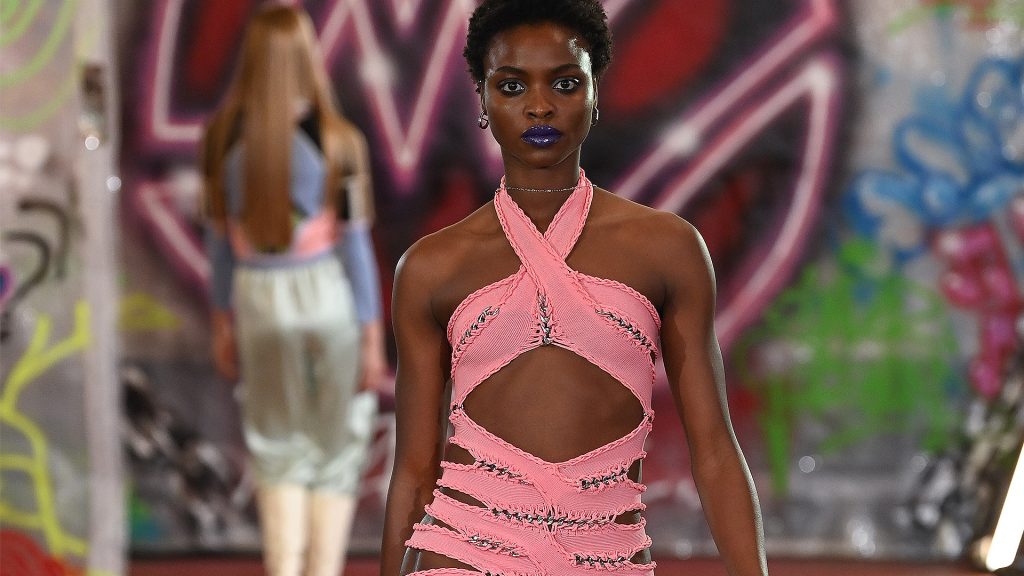 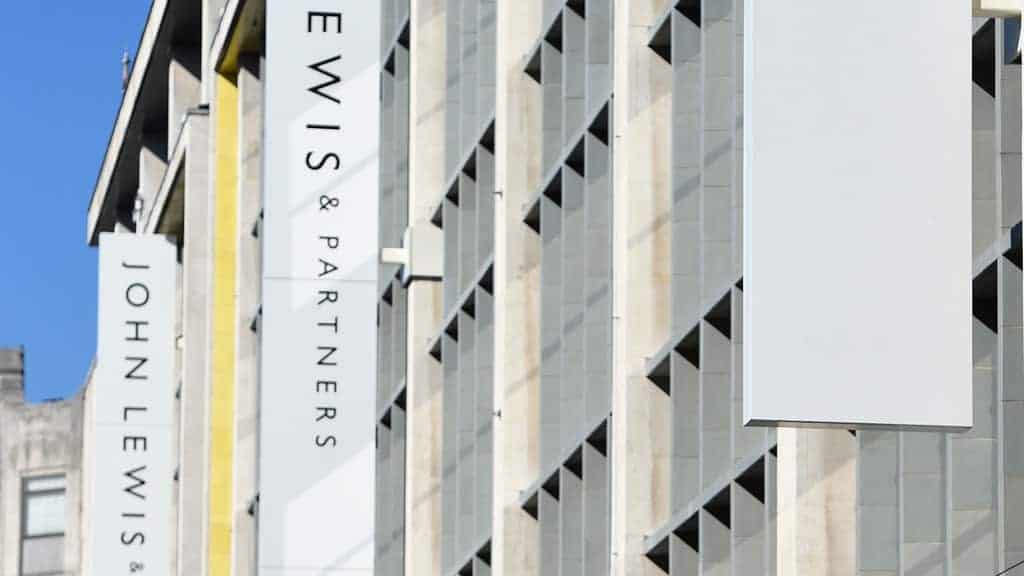