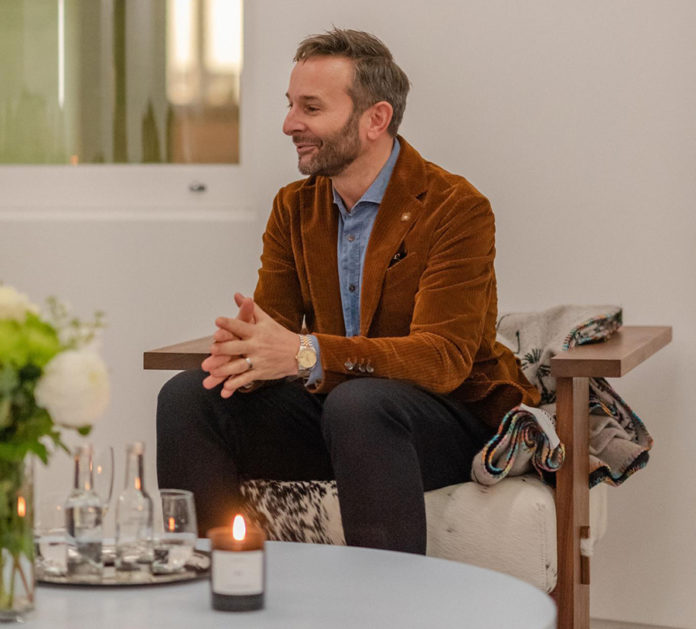 Last week, TheIndustry.fashion, in partnership with Klarna, met with MR PORTER’s Brand & Content Director, Jeremy Langmead, to discuss his career and all things fashion and online retail. In front of an invite-only audience in the stylish surroundings of luxury brand BYREDO’s Soho store, Langmead chatted with our editor-in-chief, Lauretta Roberts. Here’s a taste of what was covered.

Jeremy Langmead’s career to date is certainly impressive. He studied at Central Saint Martins, where he initially studied to be a fashion designer before switching to a fashion journalism degree.

Nearing the end of his degree, he happened, by chance, to take a call for the busy secretary in the fashion department from someone at the Sunday Times saying they were looking for a sub-editor for a new magazine they were launching called Mirabella. They asked if he could recommend anyone. Naturally, he put forward himself, and subsequently got the job. 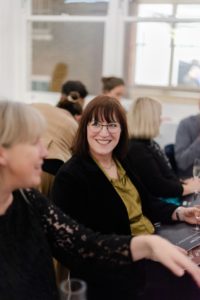 “I didn’t even know what a sub-editor was, I thought he was going to be the deputy editor of the whole magazine!” he said. Unfortunately, Mirabella only lasted nine months, as he says “sadly the market wasn’t ready for it.” But a sub-editor position at Tatler magazine swiftly followed.

It was while at Esquire that he began to see the new challenges that print journalism was facing as everything was increasingly becoming more digitally focused. His former managing director didn’t even think it was necessary that Esquire should have a website at the time, despite Langmead pushing for it and eventually doing a blog. 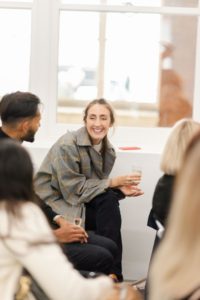 He subsequently sought pastures new, and left to join the newly formed MR PORTER team as editor-in-chief in 2010, where he was integral to its launch in 2011 as the brother site to the hugely successful women’s fashion and accessories online retailer, Net-A-Porter.com.

A brief year out as chief content officer for auction house Christie’s in 2014, then saw Langmead return to the MR PORTER fold as brand and content director in 2015. He’d been missing it, and he’s remained there ever since. Just in case he’s not got quite enough on his plate, he’s also editor-at-large of LUXX magazine on the side.

Having witnessed first hand the real changes in how people get their information from the media – from print to digital – Langmead said: “There’s been huge changes, but what hasn’t changed, and what’s still really important, is storytelling. It’s still about being interesting, informative and entertaining. Even if the medium has changed a lot, the skill set is still exactly the same. People say it’s now tough for journalists and for tough for editors because the landscape has changed so much, but actually there’s more outlets for content now than there used to be.” 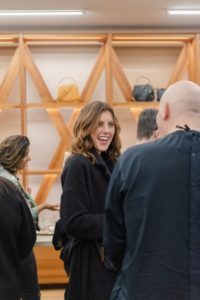 In terms of how men shop, Langmead said that he doesn’t think men are quite as different to women as they used to be. “They buy tons of clothes, and very quickly.” He also talked of the wide appeal of MR PORTER, from 19 year-olds who are snapping up Off-White sneakers, to 79 year-old gentlemen refreshing their wardrobes. “Men of all ages, who now appreciate quality and craftsmanship much more, love spending money on clothes.”

He also talked of price not being a problem. “In fact, it’s always easier to sell more expensive clothes.” According to Langmead, MR PORTER’s top customer spends a staggering £1.5m a year on clothes. “And he’s not a fashion person, he’s a CEO of a very non-fashion business.”

With the intelligence they gather from their customers, Langmead said that just 4% of parent company YNAP’s customer base are responsible for a whopping 40% of its revenue.

But what was it that interested Langmead about moving out of print media and into retail with MR PORTER in the first place? “I think the writing was on the wall for certain elements of print, and this new media was already huge and only going to get bigger, and I wanted to be part of it. The founder, Natalie Massenet, is also very charismatic and very hard to say ‘no’ to!”

Langmead likes the fact that you can tell which stories resonate well with MR PORTER’s customers online, and fast. “You can see who read it, how much of it they read and how many pictures they looked at, so you get a huge insight into what’s engaging with your reader or not.

“Every week we do a review and look at traffic, sales, downstream revenue and order value. Creating content is a dialogue, not just with the feedback you’re getting from the data, but also from social media and all the different platforms. It does make you feel like you are part of a community and we’re actually engaging with our readers.” 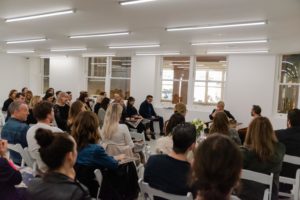 That said, Langmead also still understands the importance that print can still play, hence the magazine, MR PORTER Post, which is published six times a year for its customers. “It’s a way of re-using content that we’ve produced for online and giving it a different lease of life in a newspaper format. We send it to our top customers, and we put it in boxes at certain times of the year with purchase orders. It’s more anecdotal feedback than data feedback with print, but it’s self-funded with the advertising.”

According to Langmead, men ask a lot of questions before buying something. They really want the information and, if you can answer their questions to their satisfaction, then they tend to make a purchase.

“Men also have quite fragile egos and are terrified of getting things wrong or looking stupid. Also, we don’t, on the whole, talk to each other about clothes, as women do. About watches, yes, about shoes, a little bit maybe, and cars, of course, big time! But, when it comes to clothes, men generally don’t want to look like they don’t know. That’s why our ‘five ways to wear’ and our ‘how to’ are our most popular concept stories.”

Langmead believes that it’s the internet that has really transformed menswear over the last decade. “A lot of men still don’t like going to a shop, or shopping,” he said. Sitting at home and getting clothing suggestions and advice online had made things easier, as men don’t like to make mistakes. Also, casualwear and sportswear has evolved so much that there’s a lot more questions to ask.

“I think it’s the anonymity of online questioning about clothes that has transformed menswear,” he said. “You have to make things easy for guys. Also, a lot of the content we produce is about reflecting the lives our customers are leading and being genuine.”

Interestingly, Langmead revealed that MR PORTER’s biggest categories are sneakers and shoes. “The numbers we sell are jaw-dropping. I think, with shoes and sneakers, part of it is it’s the one size men are really confident they know about themselves.”

The technology side of things is something that is consistently evolving, and Langmead points to constant changes as “keeping us on our toes and both young and old at the same time.”

As a result, they are, as are all the others out there, always having to update how they talk to their customers and how they reach them. “It’s about making those judgements as to which platforms to be on, and how much to put on each platform, and how much to localise. Instagram is a big favourite and everyone now wants video, and a quick turnaround, which makes it harder for luxury brands.

“There’s also the new video-sharing platform that everyone is talking about, TikTok, as well as podcasts and now smart speakers, which are already huge, but are only going to get bigger. They are a great way to get your brand values in to someone’s head.”

Langmead said that men have also become adept at putting together their own mood boards on Pinterest, as well as shopping via such social media platforms, which has changed the playing field.

The top customers increasingly want a bespoke personal service, and MR PORTER’s personal shopping team has become key to the business. “They become friends with customers, and even sometimes take them to fashion shows, so they are very well looked after. It’s a big part of our business.”

Branching out the MR PORTER business, Langmead sees new territories as ripe for growth, including the Far East. Other product areas, such as homeware, are now making big strides on MR PORTER, as Langmead said if people like nice clothes then it makes sense that they like a nice home. “Lifestyle is a big growth category for us,” he commented. “We’ve even toyed with doing travel, Jet-A-Porter perhaps?!”

The collaboration with the Kingsman film on a suiting and clothing range was another new business driver, as well as leading to a bricks-and-mortar store at 4 St James’s Street in London’s St. James’s.  “That was a big marketing platform for us, as it introduced us to a whole other industry. It’s all about authenticity and getting it right, and we really did use the best fabrics for Kingsman. It was a costume to collection story.”

Langmead pointed to the websites where they are ”living and breathing what they are selling” as the ones he looks at most. Also, he thinks a lot of the more exciting content now is through video.

He said: “Also, a lot of people are using animation now, and I find that quite thrilling. There’s so much creativity and originality in video and animation video.

“Instagram is what I look at the most. Instagram stories are probably the best content that’s being produced now. A lot of the Insta stories now are almost like mini-magazines, and now you can shop from them – so it works well for the retailers.”

Finishing up, Langmead said he sees big potential and new opportunities with YouTube, especially with videos that test products and genuinely engage with customers. “It has to be engaging, but we need to learn how to translate that approach in to the luxury end. That real genuine creative customer content that feels real, but needs a bit of polish to be on MR PORTER.”

In Conversation… with Jeremy Langmead took place at the luxury fragrance and lifestyle brand BYREDO’s store in Soho, London. The In Conversation… series is staged in partnership with Klarna. The 2020 schedule will be announced soon.

Proudly staged in partnership with: