Hackett London has returned to the world’s most famous sartorial street with a new global flagship store and bespoke concept “J.P. Hackett, No.14 Savile Row”.

Formerly the home of Hardy Amies, the Georgian townhouse at No.14 Savile Row is one of the street’s most imposing properties. It was built as a family home in the 1730s, and converted to a tailoring house in the late 19th century. The building was bombed during the Blitz, and left in ruins.

In 1946, British couturier, Sir Hardy Amies, purchased the property and restored the building, turning it into his studio and showroom. His former office is now Hackett founder, Jeremy Hackett’s.

The building still carries memories of Amies’ time at No.14, including his first floor bay window above the central staircase, and a secret bathroom installed for Queen Elizabeth II, to use during her visits to meet with Sir Amies, who was the Queen’s Royal Dressmaker between 1952 until his retirement in 1989. 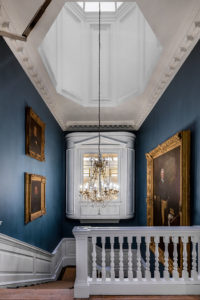 Hackett has leased the building from the Pollen Estate, and partnered with renowned British architect and interior designer, Ben Pentreath, to restore No.14 to its former glory.

Original panelling, doorways, fireplaces and stone floors have been painstakingly restored, while four 17th century chandeliers have been cleaned and reinstated. 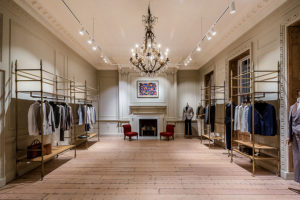 The ground floor features a new “Clubroom”, a luxurious home-from-home for Hackett customers, complete with a cocktail bar and bright green painted panelled walls. The paint palette used throughout is period-correct for the early 18th century, mixed by Farrow & Ball. Another standout area is the ground floor changing rooms, which are painted in hot Georgian orange. 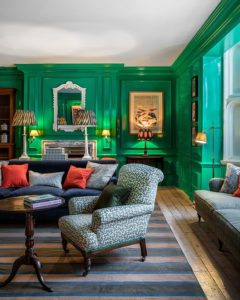 The new store will host Hackett’s new and exclusive Savile Row ready-to-wear collection, as well as the brand’s Made-to-Measure and Bespoke Tailoring services, overseen by a new Head Cutter and his team of tailors. Customers will be able to see the Cutter at work at his cutting table in the very heart of the building, in the grand first floor drawing room that used to be Sir Hardy Amies’ showroom.

Hackett has also teamed up with D.R. Harris & Co., chemists & perfumers since 1790, on an exclusive fragrance called ‘No. 14” to celebrate the opening of the new store.