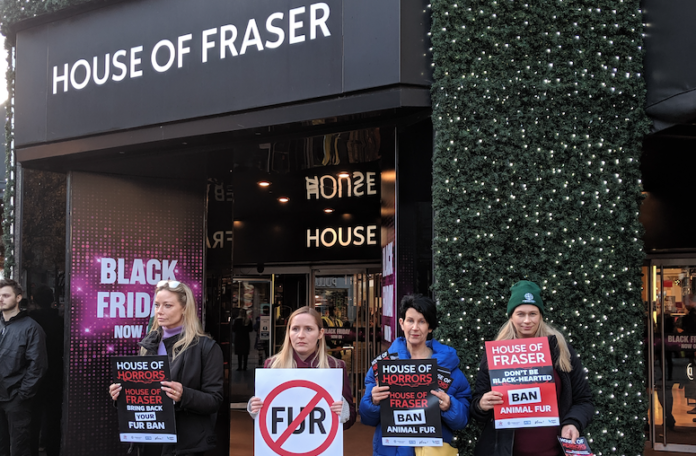 In November 2019, House of Fraser decided to restart the sale of clothing containing fur after being fur-free for a decade. The decision had been met with consumer condemnation with many taking to Twitter to pledge a boycott. It also runs counter to the tide of brands and retailers who have dropped fur in the past two years.

Having been called out recently after fur items were spotted in its Oxford Street store, initially House of Fraser removed the items from the store and online, however they have since crept back on-sale. It has now publicised a new policy claiming it only stocks fur from “responsible sources”.

During the meeting, the Executive Director of Humane Society International/UK spoke to shareholders urging them to rethink the company’s u-turn on being “a compassionate retailer”, noting that as recently as in 2018 House of Fraser’s Head of Sustainability gave evidence to a House of Commons Select Committee Inquiry confirming that its customers were very firmly against fur and didn’t want it to be sold by the store.

The decision appears to have been introduced after the company was bought out by Sports Direct in August 2018.

Claire Bass, UK Executive Director of Humane Society International has said: “House of Fraser customers have made it clear they don’t want anything to do with the cruel fur trade, so it’s shocking that the retailer has ditched its long-standing fur-free policy, a move that’s out of touch with public and fashion industry opinion. We are urging House of Fraser shareholders to do the right thing for animals, and animal-loving customers, by reinstating its fur-free policy.”