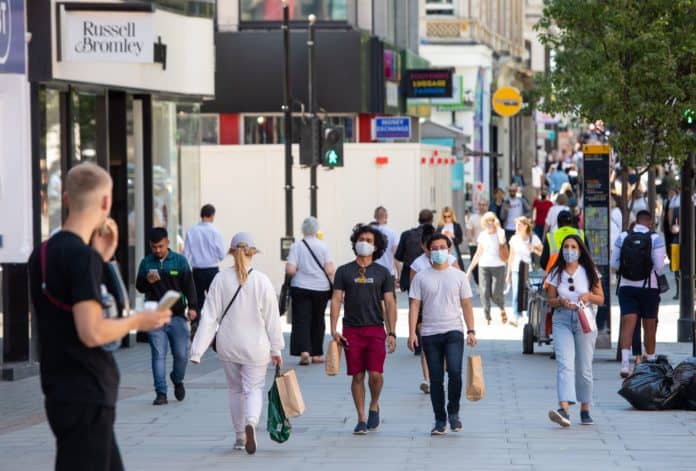 High Street retailers looking forward to ‘Freedom Day’ on 19 July, when shopping can supposedly return to pre-pandemic normality, may not have the desired effect as consumers remain cautious of all restrictions being lifted by the government.

According to new research by delivery expert ParcelHero, 68.5% of consumers want mask wearing and social distancing measures retained after 19 July, and the relaxations will damage consumer confidence and drive shoppers back online – doing more harm than good.

As COVID-19 cases continue to surge, the increase in high street footfall has already faltered over the last fortnight.

ParcelHero’s Head of Consumer Research, David Jinks, said: “Of course, everyone yearns for the pandemic to be over. The so-called Freedom Day is the opposite of that, however. The end to mask-wearing and queues outside stores will restore the optics of normality, but these are the very measures that will enable the virus to spread faster than ever.

“The new Health Secretary, Sajid Javid, clearly believes he is still Chancellor of the Exchequer and appears to be putting the needs of the economy over the growing risk to the public. It’s a move that could well backfire as consumer confidence tumbles.

“On 6 July, Mr. Javid told Sky News he was ‘very comfortable’ with Prime Minister Boris Johnson announcing that almost all COVID restrictions will be lifted on 19 July, which marks the next stage of the Government’s roadmap. That same day, Javid admitted that resulting daily infections may soar to 100,000.

“Medical experts were quick to speak out against the relaxations, as 122 scientists and doctors signed a letter to the Lancet medical journal saying the UK government is conducting a ‘dangerous and unethical experiment’ and urged it to reconsider plans to abandon all Coronavirus restrictions.”

ParcelHero’s finding is backed up by a new Ipsos MORI poll for The Economist, which showed that seven in 10 Brits (70%) want face masks to remain compulsory in shops and on public transport for one month after 19 July, while almost two in three (64%) would like such restrictions to remain in place until Coronavirus is under control worldwide.

Jinks added: “With that in mind, if it’s confirmed that compulsory mask-wearing will end on Freedom Day, the government and retailers shouldn’t be surprised if shoppers abandon the high street rather than compromise their health or holiday plans.

“In recent weeks, the public has become increasingly concerned about the rise in the Delta variant infection rates. Data from analysts at GfK shows overall consumer confidence stalled in June as cases grew. It remained at minus nine, the same as the preceding month, thereby ending a sustained period of growth.

“High street footfall has already started to decline, with retail analysts Springboard reporting that shopper numbers in June declined by -27.2% compared to the same period in 2019. It found that, after a strong first week of June, as Delta variant cases grew, each subsequent week saw worsening footfall across all retail destinations.

“Tellingly, ParcelHero has seen home delivery and parcel volumes grow 7% in the last fortnight. This indicates that consumers are making more ecommerce purchases and reducing personal visits to friends and family.”

Retailers are also worried about the impact that relaxing measures could have on staffing levels, as many who work on the shop floor are in the 18-24 age group, most of whom are yet to be double-jabbed. Businesses are concerned there could be a steep rise in staff falling ill or having to self-isolate.

BRC CEO Helen Dickinson commented: “Our primary concern is that government messaging is clear about what is regulation and what is advisory so that people understand what’s expected of them, and that people are tolerant and allow others to make their own personal choices.

“There has been a big rise in violence and abuse against retail workers during the pandemic and colleagues cannot be put in the firing line because of this change in policy. Retailers will have many people in their stores who want to continue wearing masks, and many who don’t, and will have to accommodate everyone.”

It’s a very sensitive situation as many retailers weigh up whether to continue to ask customers to wear masks in stores beyond 19 July.