With the doors to non-essential retail stores intermittently slammed shut for the best part of a year – and physical product sampling severely restricted during the brief periods of opening, the UK’s beauty industry has been forced to innovate at breakneck speed in a bid to claw back vital sales.

While developments in the fields of artificial intelligence (AI) and augmented reality (AR) have been simmering under the surface for a number of years now, the current challenges have seen demand for the tech brought suddenly and sharply to the boil.

As L’Oreal’s chief digital officer Lubomira Rochet puts it: “services are the new gateways for discovering our brands and products.”

Cut off from traditional sampling routes, the UK’s increasingly tech-savvy consumers are also demanding much greater efficacy from said services; forcing brands to ditch the gimmicks and make key improvements to user experience, light-reading technology, intuition and much more.

The developments also tap into the growing consumer trend towards custom-fit products and services which can be personalised to offer unique, tailor-made results.

L’Oréal in particular has been pushing the AI and AR envelope with a number of developments to help shoppers virtually ‘try on’ products from a number of its key brands including Maybelline and NYX.

L’Oréal is also gearing up for the launch of Yves Saint Laurent Rouge Sur Mesure Powered by Perso later this year.

And L’Oreal has certainly not been alone. From Charlotte Tilbury’s Magic Mirror Make Up Try on to MAC’s Virtual Try On for lips and eyes, recent months have witnessed the launch of an array of next-generation tools through which more beauty consumers than ever before are now successfully trialling and buying products – all from the comfort of their own homes.

Google in the US also launched new features to help shoppers visualise new make-up looks and “try products on” virtually in late 2020, while earlier this month Pinterest in the UK extended its AR shopping features with AR Try on for eyeshadow. 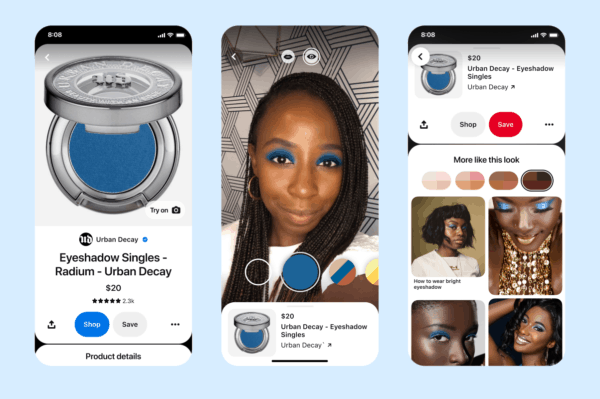 And, as Alexia Inge, co-founder and co-chief executive of the Cult Beauty brand, which has just launched the AI-powered MatchMe foundation finder explains; the trend towards online make-up discovery is one that certainly looks set to not just stay, but boom, long after the current virus fears (hopefully) recede.

“Covid-19 and the forced closure of shops has without a doubt accelerated the trend towards online make-up discovery,” she says.

“When it comes to the complexion category specifically, not having access to samples and not being able to do the back of the hand test has been a key driver, but it’s not just about now, it’s also about the future, because the future of in-store sampling is pretty much dead in the water. Who is really going to want to do that going forward?”

“What’s really good about these types of technological advances too, and MatchMe in particular, is that they are also the eco-friendly option, which is so important to consumers and businesses alike these days,” she adds.

“It negates the need for foil sample sachets, which was the only other option we had before as a pure-play or online retailer.”

However, developing the tech has certainly not been a stroll in the park.

In fact, the development process behind MatchMe, which began in 2019 following a partnership between Cult Beauty and US-based tech solution Make It My Experience (MIME) has been something of a minefield, as MIME CEO and founder Chris Merkle explains.

Finding a way to “oversimplify” what is essentially an incredibly complex process, was one of the principal challenges, he says.

With a number of existing tools using complex “decision trees” to help consumers find their “match” – simplification of the user experience was key.

“We knew that asking consumers to nit-pick over something like 50 questions was just not going to work,” Merkle says.

As a result, the newly launched MatchMe tool asks beauty shoppers just five simple questions about their skin and foundation preferences before asking them to upload a ‘selfie.’

And despite living in the selfie age, devising a set of really simple instructions to help consumers take a good one to start with, was also crucial.

“The fact is that people just aren’t great at following directions when it comes to taking selfies,” Inge adds.

“We knew that it would be so important to give them super-easy visual cues on how to take a good one, and importantly, what not to do: such as uploading a group photo and expecting the tool to pick them out of the crowd, or uploading one of them with their pet cat or dog, it sounds crazy, but we know it happens!”

“We also knew that unless consumers were actually looking in a mirror whilst doing the skin survey, they were unlikely to give us a true description of their skin tone – and even then it probably wouldn’t be quite right,” Merkle added.

As such, a significant understanding of the consumer psychology surrounding complexion, skin tone and how people want to identify was also called for.

“For example,” Merkle said, “we did some tests in the early days which included people looking at pictures of other faces to identify which skin-tone was most like their own but the problem with that was that people were getting caught up with looking at other things in the picture, such as the person’s eye and hair colour and whether that person was attractive or not. When consumers start thinking like that, accuracy is blown out of the window.

“There is so much psychology going on in the background,” Inge adds, “especially around the ‘lighter’ and ‘darker’ element.

“More people want to look darker or richer than their perceived skin tone and this is where psychology comes into it.

“It’s a multi-dimensional problem to solve and actually human psychology has been one of the hardest elements to overcome,” Inge added.

“A lot of people also don’t like classifying themselves as having a ‘Cool’ skin tone. They want to be ‘Warm.’

“As a result, a few brands are starting to change their wording so that it’s not ‘Warm’ or ‘Cool.’

“There’s becoming more use of words like ‘Golden’ or ‘Warmer,’ people don’t want to be associated with Cool or Cold.”

Innovations in the field of light detection have also played a key role in MatchMe’s development, as Merkle and Inge explain.

“In a perfect world everyone would take wonderful pictures of themselves bathed in beautiful sunlight but this is England, it’s freezing outside!

“We know that’s not going to happen and even standing by a window, the light’s not great and that cold winter light really changes complexion too.” Inge says.

“There are an infinite amount of light combinations and a large part of the development process focused on understanding not just what type of light a person was taking their selfie in but also in what direction that light was hitting their face and where the shadows were,” Merkle adds.

“We then looked for key areas on the face that changed based on the light.”

“We also had to consider oxidization of the product and how it changes throughout the day, along with all the other elements such as finish, coverage level and so on.” Merkle added.

The result of all this work, Inge attests, is a product that can now take consumers on an effortless journey to discover their ‘Holy Grail’ base and most exciting of all; the technology’s possibilities are endless.

“It’s so important to remember that this is still a first-iteration,” Inge adds.

“There is such an exciting journey to go on with this. Who knows, in the not-too-distant future we might be able to say: this is the brand that is the best colour-fit for you and actually, this concealer works really well with that foundation.

“Something like that would enable people to just get their complexion needs sorted in one fell swoop and then get on with their days, people are busy, that’s what they want!

“There’s also no reason that the concept couldn’t go into skincare as well, to help consumers get a much deeper understanding of their unique skincare needs.

“While the possibilities are endless, one thing is certain and that is that AI and AR developments are taking consumers on a journey that is not going to stop and it’s deeply exciting.”