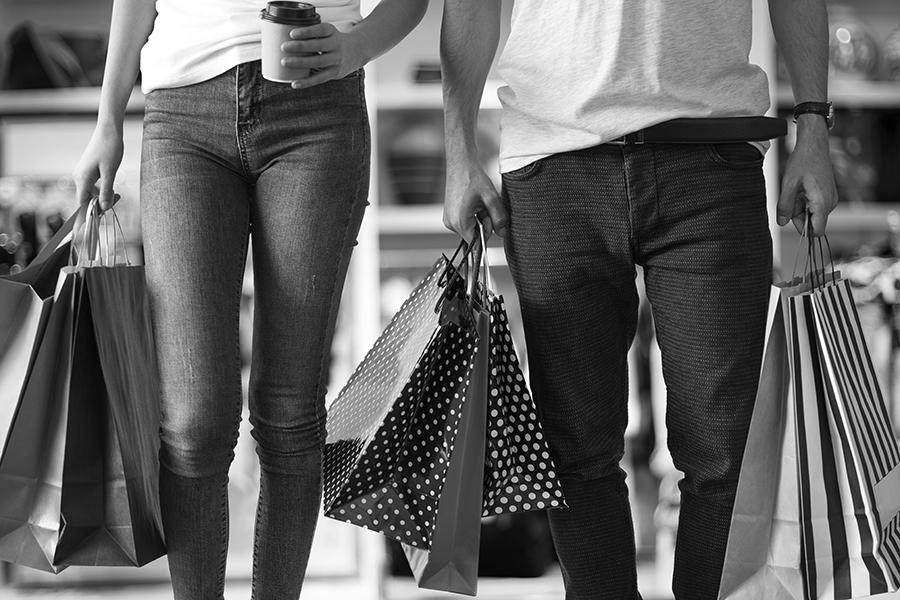 Exclusive study: How Britain will Shop for Fashion in 2019 and Beyond

To paraphrase one of British fashion’s most influential leaders (and its most accurate economic forecaster), Lord Simon Wolfson of Next, one thing we can be sure of when it comes to the future of fashion and retail is that there will continue to be high streets and people will continue to wear clothes while they walk up and down them.

Of course, what those high streets look like and what kind of clothes people will be wearing (and how often will they buy them) are too very big questions. There are so many factors at play that will influence the future – the ever-greater adoption of technology; increasing concerns for the environment; economic and political uncertainty; the shift towards a sharing economy; and a growing desire to declutter our lives of excess “stuff” – and retail soothsayers all have their opinions on how it will play out.

But we thought, under the circumstances, it would make most sense to ask those very people whose behaviour and opinions matter the most – the customer.

Throughout February of 2019 we conducted an in-depth study of 1,000 British consumers of all ages, across all regions and from a range of socio-economic backgrounds. Respondents were almost evenly split between male and female too. And we are revealing a summary of some of the exclusive findings here today.

With the proliferation of CVAs and high street gloom stories, it is perhaps surprising to find that enthusiasm for clothes shopping remains undimmed in the British consumer, and in particular among the young British consumer – our study breaks down responses by age in order that we can examine who behaviours different from Gen Z to Millennials, Gen X, and Boomers and beyond.

So with the consumer still spending and still wanting to spend, for the retailers it will come down to who can best capture that spend – in other words who can take market share. To help retailers make the best strategic decisions, we’ve asked consumers to tell how they like to shop, where they like to shop, for which reasons they shop, what influences them to shop and which factors would encourage them to shop more.

To be published in two parts next month, this study will be updated in an annual basis to track the changes in behaviour and sentiment moving forward. A copy will be made available exclusively to all members of TheIndustry.fashion’s The Intelligence service, and below is an extract of key findings.

Frequency of shopping & how that will change in the next year

This is interesting (and encouraging for fashion retailers) since we are being told that the younger consumer is focusing his/her spend on other things, be that technology or entertainment, and while that may be true, the love of fashion is still there.

There is, perhaps less surprisingly, a distinct drop-off in frequency of shopping when customers hit 45with 51% of 45-54 year-old shopping once a month or more  with the figure slumping to 32% for 55s and above.

How will that change?

So far, so encouraging but how will that change moving forwad? Given the political and economic turmoil currently in play in Britain it is surprising to hear that most people (64%) say their shopping habits have remained the same or they shopped more frequently in the past year, with just 36% saying they have shopped less frequently. Again, just this week Lord Wolfson of Next (a rare pro-Brexiter in the retail ranks) said the same thing.

And it doesn’t look like too much will change in the coming 12 months. Moving forward the picture is similar with most people (76%) planning to shop with the same or greater frequency for clothes in the coming year.

This positive figure is driven by young people’s enthusiasm for clothes shopping. 44% of 18-24 year olds have said they will shop more frequently for clothes in the coming year with a further 30% saying it will be about the same. Some 27% of 25-34 year olds will be shopping more frequently in 2019 and into 2020 but only 7% of 55s and over will do so. 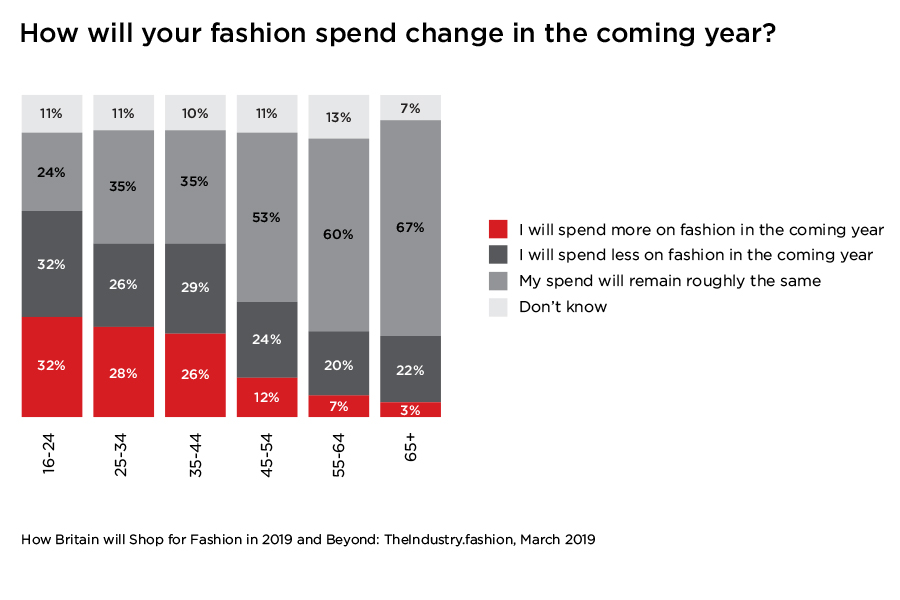 But while they are still planning to shop more, will they cut back on spend? Not necessarily (see above) and again it’s the young who are driving positive results here. Almost a third of Gen Z (32%) say they will be spending more on fashion with 24% saying their spend will remain the same. A quarter of them 24% will be spending less.

Our Boomers & Beyond group won’t be spending a great deal more but the overwhelming majority say they won’t be reducing spend either.

Social media and influencers have been under the spotlight recently with demands for greater transparency from the CMA on paid and non-paid for social postings. Our study will go into greater depth on this subject but from a consumer perspective they don’t appear too bothered either way. If a post is inspiring, whether it comes from a brand or a third party who is or isn’t paid, they don’t seem to mind.

But one thing is for sure: influencers hold considerable power over consumer spending. Of those consumers who actively follow social media influencers, more than half (53%) say they sometimes buy clothes they have seen on the influencer’s feed with a further 30% saying the often done so. 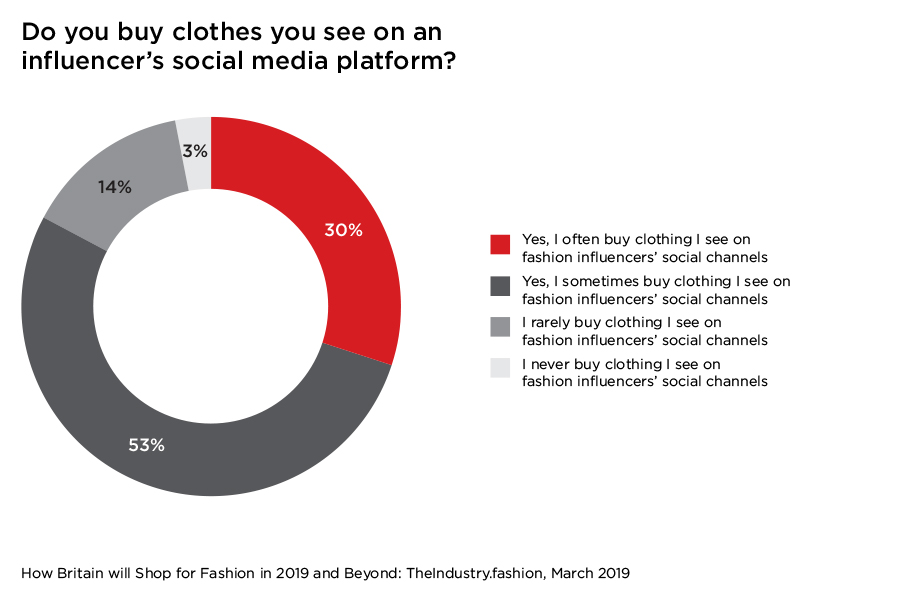 We will examine other forms of media and their influence in the study (printed media and online magazines for instance) but at a high level for now it is interesting to note that the most enthusiastic consumers of content via a brand’s social channel are those in the young millennial category (25-34 year olds) with almost half following brands on social media. For Gen Z that comes in lower at 39% suggesting brands will have to think of more creative ways of reaching this potentially powerful future consumer. As expected, interest in social media drops the older a customer gets. 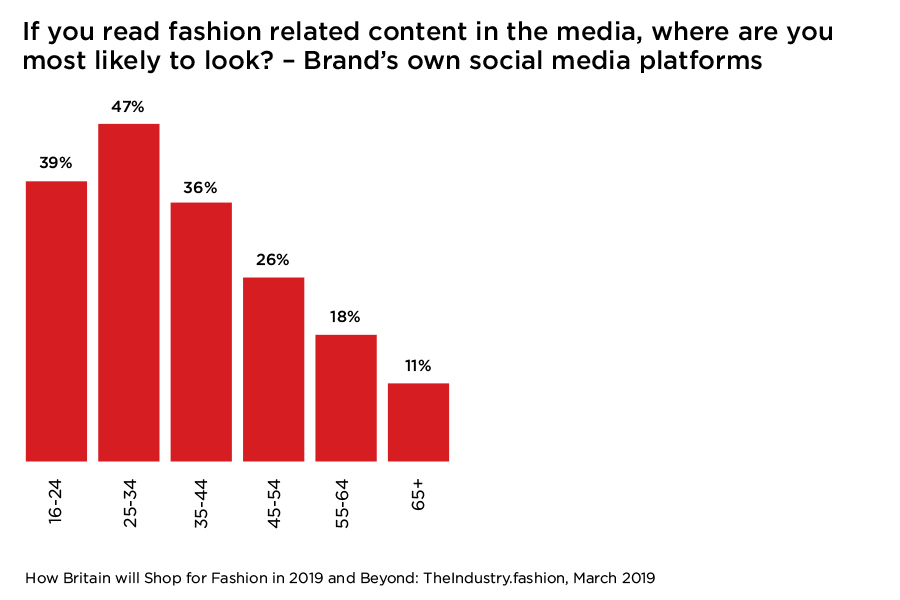 So, if shoppers are spending and are happily influenced into spending more, why all the store closures? You won’t be surprised to hear, it’s the internet, and specifically the convenience offered by the smartphone. Our study reveals that the smartphone just shades the physical store (44% to 43%) in our list of channels people most use to shop. We could expect that gap to widen next year. 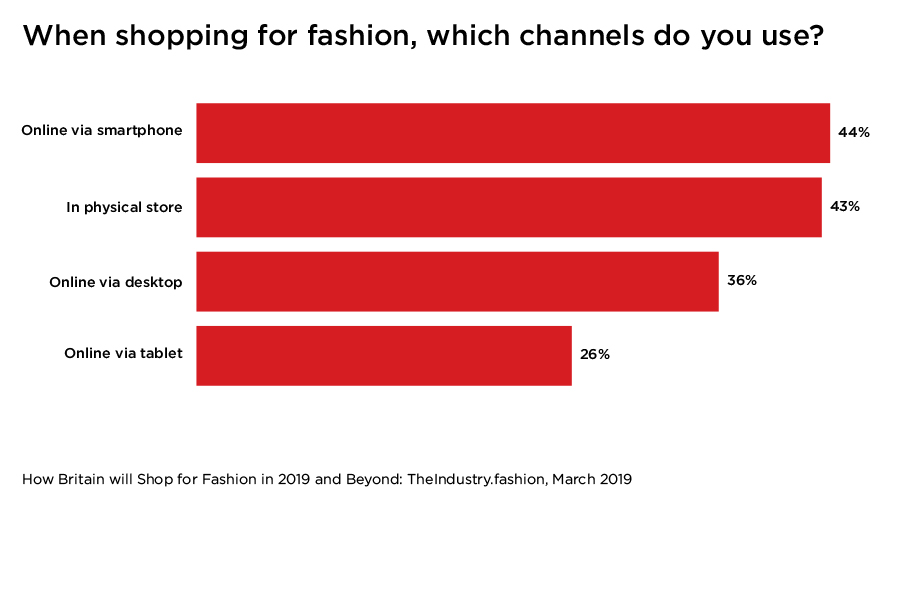 But there is one thing that stores can do that smartphones never will be able to (OK, there are some smart apps emerging allowing people to virtually try on clothes) and that’s allow people the chance to touch, feel and try on clothes. An overwhelming number of shoppers (67%) said this was the very best thing about shopping in-store (note to retailers, you might want to invest more in making this experience more pleasurable) with a further 51% enjoying the option to browse.

There may also be a bit of a staff training prompt in the chart below because just 18% find service in store to be one of the best things about physical retail and, given that this personal touch is something that cannot be so easily replicated online (and again, yes there are apps like Hero that allow online shoppers to connect to in-store associates), some care and attention here could perhaps go a long way to ensuring the future of the physical store.

In a separate question we asked consumers what would encourage them to spend more in a store and 31% said a more pleasant in-store experience would do the trick, and that came second only to easy and affordable parking at 36%. So something to think about... 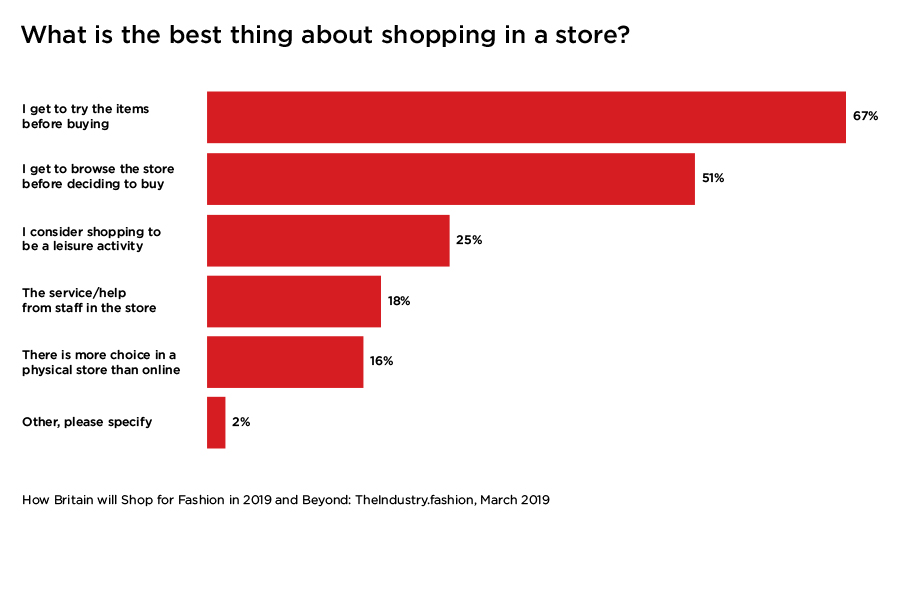 Unsurprisingly where online trumps stores is convenience. 60% say it’s one of the best things about shopping online, along with a further 46% praising the choice and 41% believing the prices are better online. 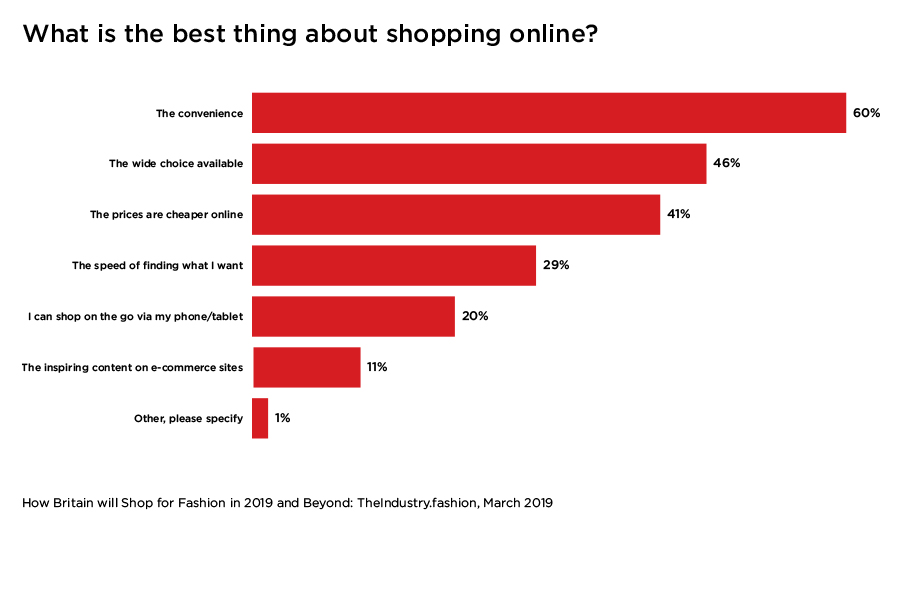 In order to take away some of the advantage of a physical store, some online retailers (such as Amazon and ASOS in partnership with Fintech firm Klarna) are offering services that allow customers to try at home before they buy and almost half of consumers (48%) say the offer of such a service would encourage them to spend more online. Click & Collect would be welcomed by 34% and more flexible payments (which some are offering as an alternative to discounting) would attract 23% to spend more online. 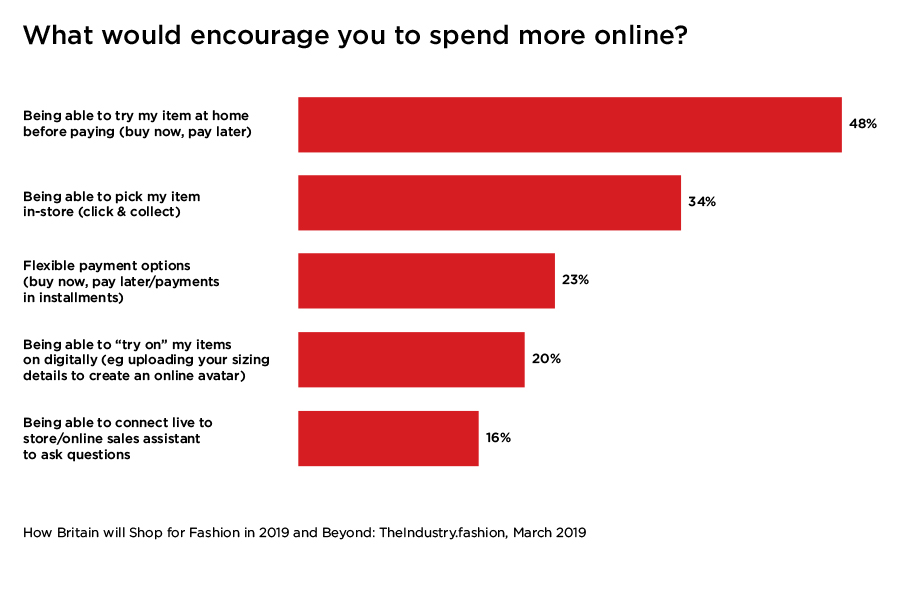 Next week, in Executive Summary Part 2, we will give you a snapshop of attitudes to sustainability and the opportunity for new forms of retail to emerge (from existing and new businesses) in areas such as rental and used clothing. PLUS, we will be revealing our shoppers' favourite brands.

The full report, including commentary, case studies and more detailed data will be published in April.

How Britain will Shop for Fashion in 2019 and Beyond was created in partnership with leading consumer research experts Savanta and the content is exclusive to TheIndustry.fashion. Some 1,000 British consumers were surveyed during February 2019. The sample comprised 51% female and 48% male respondents (with 1% preferring not to say). Age groups were evenly split to give a fair cross-section of opinion 16-29 (23%), 30-44 (28%), 45-59 (25%) and 59 and over (24%), and all regions were covered. 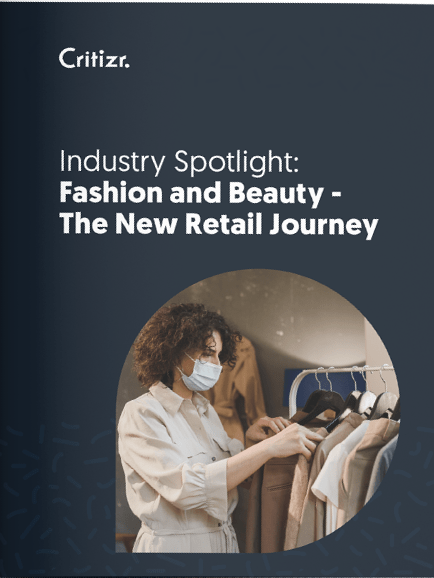 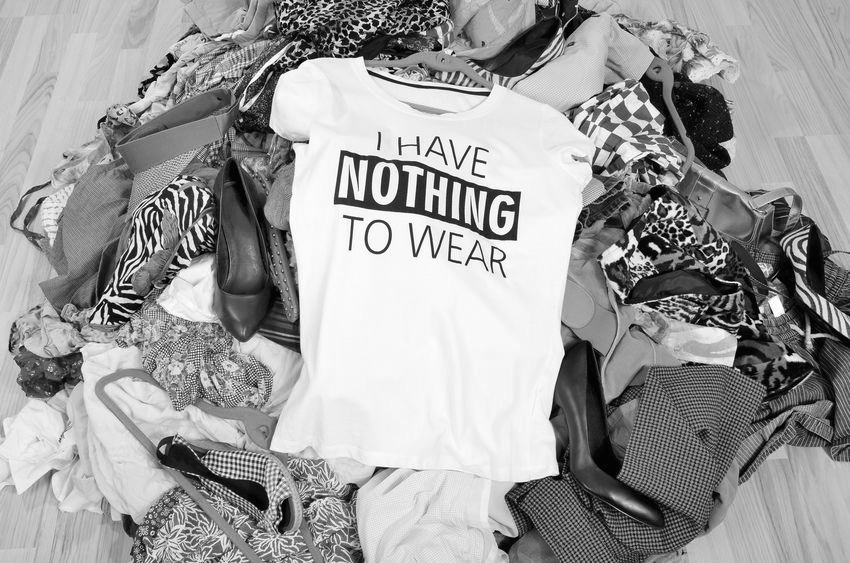