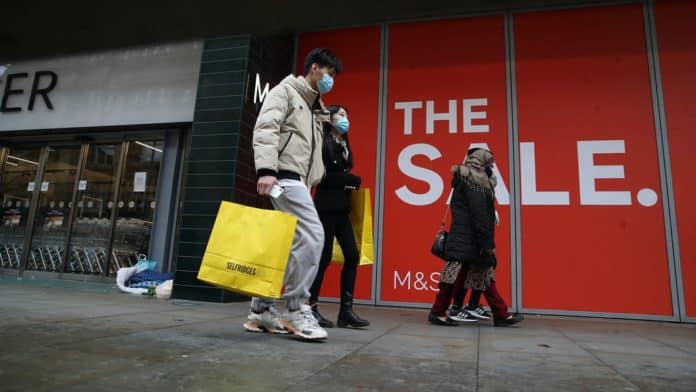 UK inflation picked up pace in December after hard-hit fashion retailers held off from further steep discounts and as transport costs edged up, according to official figures.

The Office for National Statistics (ONS) said Consumer Prices Index (CPI) inflation rose to a slightly higher-than-expected 0.6% in December from 0.3% in November.

It said clothing prices rose marginally – up 0.1% – between November and December, in contrast to the usual falls seen due to Boxing Day sales, though prices still dropped on an annual basis.

Suring demand for computer games and consoles and children’s toys pushed up inflation further, with annual recreation and culture inflation hitting its highest level since August.

“Transport costs, including air, sea and coach fares, as well as petrol prices, rose as some travel restrictions eased during parts of the month.

“These were partially offset by falling food prices, most notably for vegetables and meat.”

Clothing and footwear retailers had already slashed prices in November amid the second lockdown in England, which disrupted the usual discounting seen after Christmas.

Swathes of the high street were also forced to shut amid tightening coronavirus restrictions just before the holidays.

The ONS said the annual rate of clothing and footwear inflation fell by 1.8% against the unusually steep 3.6% decrease in November.

Recreation and culture annual inflation jumped to 2.6% in December, while transport cost inflation hit its highest for 18 months, at 1.9%.

The data also showed that petrol prices rose 1.5p over the month to 114.1p a litre, as the oil price continued to climb.

Higher alcoholic drink and tobacco prices saw a CPI rise last month, with 2.2% on tobacco products due to a tax hike from mid-November.

The Retail Price Index (RPI), a separate measure of inflation, was 1.2% in December, rising from 0.9% the previous month.

The CPI, including owner-occupiers’ housing costs (CPIH) – the ONS’s preferred measure of inflation – was 0.8% last month, up from 0.6% in November.

Samuel Tombs, chief UK economist at Pantheon Macroeconomics, said he expects inflation to remain low until April, when a potential increase in the energy price cap could help push CPI up to 1.5%.

He added: “CPI inflation will also rise in the hospitality and recreation sectors in April, when VAT will return to 20% from its current 5% rate, though most businesses declined to pass on the saving to consumers and so will not automatically hike prices.”

He stressed that the risk of inflation going above the Bank of England’s 2% target “seems low” throughout 2021 and 2022.