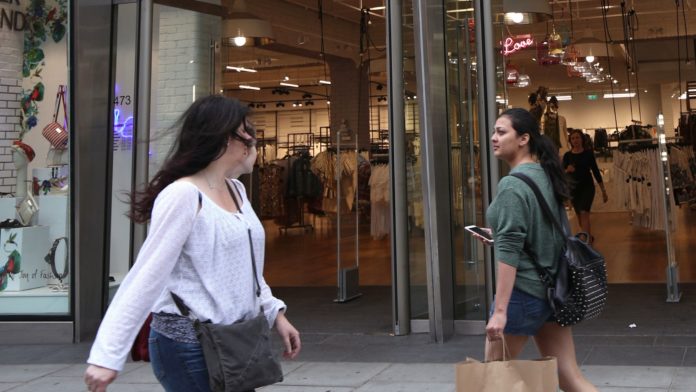 The warm late summer weather helped food sales in the UK grow, but these were offset by a fall in non-food sales as shoppers continue to wait and see how Brexit plays out, new data has revealed.

In August, UK retail sales fell 0.5% on a like-for-like basis, compared with the same month last year, according to the British Retail Consortium (BRC) and KPMG.

Helen Dickinson, BRC chief executive, said: “Greater economic and political uncertainty has driven down consumer demand. While the summer weather gave a small boost to food sales, this was cancelled out by a drop in non-food sales.

“Summer discounting and poor footfall have hit in-store sales particularly hard. If the Government wants to avoid seeing further store closures and job losses on the UK high street, they must take action.”

The trade body is urging the Government to overhaul business rates to avoid more retailers going bust. But the Government has made no firm commitments.

Over the three months to August, food sales decreased 0.3% on a like-for-like basis and increased 0.5% on a total basis.

But, despite the rise in total sales for food, non-food sales during the period declined 3% on a total and like-for-like basis, helping to drag down the 12-month total average to -2.6%.

KPMG head of retail Paul Martin added that the majority of retailers are focused on preservation, rather than growth, due to the political and economic uncertainty.

He added: “The rhythm of the back-to-school promotions did provide some reprieve, bolstering sales of children’s fashion and footwear. This also appeared to benefit fashion sales more broadly.

“As has been the case for some time now, online sales outperformed the high street, but with growth as low as 2.2%, it’s clear that even this channel has slowed down drastically.

“With a budgetary Spending Review, the Brexit crunch point looming and potentially a general election on the cards, it’s clear that the only thing that is certain in the coming months is further uncertainty.

“It’s vital that retailers insulate themselves for every eventuality and have rigorous contingency plans in place.”