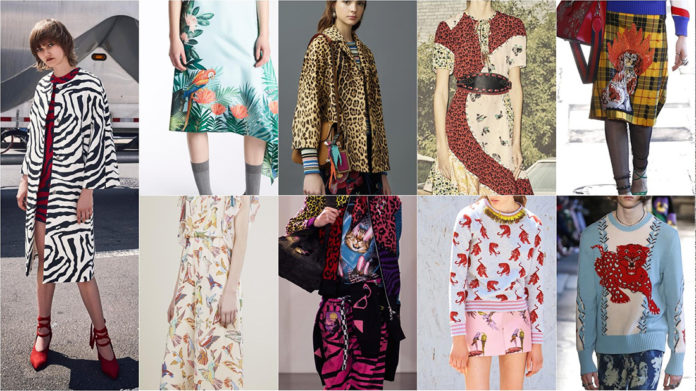 Print and pattern continue to be key trend drivers, helping to ring the changes on some reassuringly familiar silhouettes and adding newness from day into evening across categories.

Designers plunder the animal world for a menagerie of allover and placement prints. There really is something for everyone and it’s not a question of “is it photoreal” or “is it faux”? It can be both – and more. Realistic leopard and snakeskin butt up against obviously ‘fake’ versions (best in intense shades of blue, pink or yellow at Marc Jacobs). The big cat theme is carried further with giant panther or tiger motifs, or exotic cat repeat prints. Cat and dog motifs continue but with an offbeat edge that’s part retro, part cartoonish. Zebra also makers an impact, carrying on the fashion world’s love of stark black and white. And exotic birds take over from butterflies if you want to combine animal print with a delicate edge. Find them either nestling in a jungle of exotic flora or used as a repeat print on a pastel ground for dresses or separates.

Fauna may be big but flora is bigger. Soft repeat print florals work surprisingly well on rugged casualwear as much as they do on warm weather day dresses and occasionwear. Exotic florals on a dark ground, tropical fronds, and Chinese lacquerware-influenced floral motifs move this particular print story out of its everyday ditsy or meadow territory into a more dramatic phase that screams “look at me”. A surprisingly large number of designers used high-impact florals on tailoring too helping to bring the pantsuit into a new era, especially when worked in floral print denim. Contrast florals also made an impact in a pre-season when mixed prints have proved a key direction. And cartoonish florals look interesting too – think of the background of a Disney movie and you’re on the right track.

A hardworking pattern story makes the most of two (or at most three) powerful colours. Interpreted in florals, stripes, checks, abstracts or geometrics, the newness this pre-season is in muted reds and off-whites, but blue and white, sepia tones on a light or dark ground, and classic black and white also stake their claim for a place in the sun. Use these duotone prints allover on sundresses, blouses and especially beach separates. Or use them in a clashing pattern contrast or a pattern/plain contrast for occasionwear coats and casual jackets. Duotone is also a strong story for intimates and sleepwear – imagine these prints transplanted onto cotton pyjamas, jersey sleep separates, camisoles and slips.

The knit and graphic tee sectors have plenty to inspire them this pre-season as designers play with slogans and dramatic placements that often have a retro feel. Popular motifs include hearts, fruits, snakes, rising suns and flag prints. Each can be used in any number of combinations with logos, slogans and, of course, with each other. Their high-impact effect means you can find them on the simplest pieces like slouchy or surprisingly classic sweaters, tees and sweats, knit tanks or the back of bomber/varsity jackets.

Storytelling prints and patterns can’t be ignored this pre-season as key labels use them to add drama to both day and eveningwear and even, in an unusual twist, outerwear. The scenic views can be dramatically realistic, graphic or even faux-naive. But whatever the artistic approach, the aim is to transform an otherwise-simple piece that could have been made in any one of numerous seasons over the past few years but to mark it out as 100% 2017.

Stripes are a multiseason volume staple that have also been at the heart of key fashion stories in recent seasons. For Resort 2017 they’re moved on with duo or multicolour diagonals that cross and clash with each other. Swirling stripes, broken stripes and smudge-edge stripes also signal this is a pre-season where regularity isn’t on the agenda. In fact, where straight stripes are found, designers aim to mix things up as much as possible with multiple colours and varying widths. These stripes really will come into their own this pre-season as designers play with new ways to dress up denim, as they give us formal and casual duster coats, plus wide trapeze line dresses and fall in love all over again with traditional cotton shirting used for crisp dresses and, of course, a new breed of shirts influence day the gender-neutral trend.

Denim: from dressed up to ultra decorated

Jackets: the bomber and the biker go into battle

Details: a frill a minute

Bags: watch out, snakes about